A family affair makes music for all ages

A family affair makes music for all ages 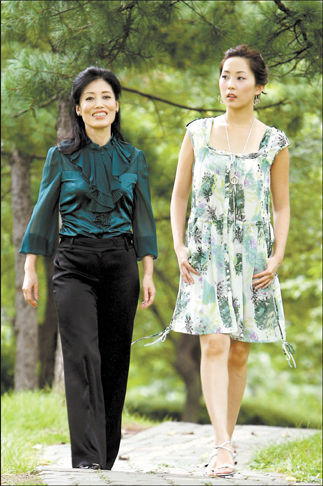 Singer Jeong Hun-hee and singer-song writer Jeong Jae-young a.k.a. J, stroll through a park talking about their musical careers. By Choi Seung-shik

A mentor could be defined as “a trusted friend or an experienced counselor who has already been there and done that.”
In history, it is said that Aristotle mentored Alexander the Great, and Belgian professional cyclist Eddy Merckx mentored Lance Armstrong.
So it could be said that classical singer Jeong Hun-hee is Jeong Jae-young’s mentor. Better known as J, the 30-year-old singer-song writer is also Hun-hee’s niece.
Jeong Hun-hee made her debut in 1967 with her song “Fog.” Various other hits followed including “In the Flower Bed” and “Desert Island.” She won third place in the 1975 Chile Song Festival and also received the popular star award for the 5th Greece Song Festival in 1972.
But J, who was raised in the United States, wants to do even better. After she made her debut in 1998, she signed a deal with BMG Japan the following year. With her soulful R&B voice, J had various hits in the domestic music charts.
Though Jeong and J specialize in different musical genres, they recently sang Jeong’s “In the Flower Bed” together during a popular music show. The song was arranged into a more jazzy and modern style, compared to the original.
“The young audience thought that Jo Kwan-woo [a Korean singer with a high-pitched voice] was singing,” said Jeong. “They seemed charmed by my tender and melodious voice.”
Jeong said that the remake of the classic song got a positive reaction from the public.
“When I sing this song, I feel like a young girl rambling through a flower bed,” Jeong said. “My heart becomes pure.”
Legendary music producer Lee Bong-jo recommended Jeong for the song. “Lee said the song was perfect for me to sing.”
Actually, Lee deserves credit for discovering Jeong’s talent. He saw her perform in a hotel club and told her in a Gyeongang Province dialect, “You sing very well, saucy girl.” Lee’s words marked the start of Jeong’s music career.
Jeong and J will each release a new album this fall. It will be Jeong’s first solo album in almost 30 years. (Her last album was released in 1978.)
“I asked my aunt to sing ‘8318’ with me,” said J. “The style and sound of the song matched her so well.”
Although Jeong has been J’s spiritual mentor, she wasn’t much practical help when J made her debut in 1998.
“The first thing my aunt told me when I came to Korea in 1996 was ‘Being a musician is tough - you will have an empty stomach.’” J said, “I spoke poor Korean and my aunt scolded me when I listened to pop songs.”
Jeong put pressure on J to incorporate Korean emotions into her songs so that she would have a wider appeal in the local market.
Jeong said, “I was worried to see J being controlled by her agency at first.” But Jeong stayed silent on the issue and told J she should “endure all the trouble to become a true singer.”
After some hardships, Jeong was relieved to see her niece find her own singing style in her second album. “I’m proud of her now,” Jeong said.
Beause she can exchange musical emotions with J, Jeong says she can make successful contributes to albums for young musicians.
For example, Jeong featured in Yoon Sang’s “Ask Soweol” and Yoon Jong-shin’s “Bad Wife.”
Jeong said that her open-minded character allows her to stay young and mingle with modern K-pop stars.
Jeong’s upcoming album also features young stars including D.J. DOC, 45 RPM and Yoon Sang. Jeong’s singer-husband Kim Tae-hwa also contributes to the album.
With such a variety of genres and ages on Jeong’s album, J said, “My aunt always told me that there are no barriers or answers in music ― each artist should be respected for his or her own style.”
Jeong dreams of having a family of musicians, like conductor Jung Myung-hoon’s.
In fact, Jeong’s father, Jeong Geun-soo was also a well known singer during the Japanese colonial era. Her husband Kim Tae-hwa is also releasing an album this fall; Kim Dae-han and Kim Min-guk (Jeong’s two sons) are also planning to make their singing debuts next year. J’s father was also a singer and guitarist with the 70s rock group He 6.