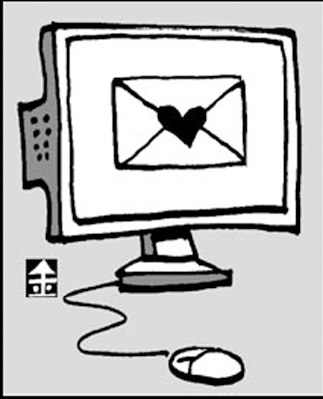 E-mail subject lines have become spicier since 2000 when the IT bubble started to subside. Those who opened an e-mail titled “I love you” found their curiosity came at a price. Cyber rascals must have found the story entertaining, because many wacky names were developed for computer viruses for some time afterwards.
When Ray Tomlinson, an American programmer, sent the first e-mail in the world to a friend in 1972, he must not have known what a revolution his invention would cause in the field of human communication. The symbol “@,” which refers to the English prefix “at,” had various names in different countries. It was called a cabbage in the U.K., a monkey’s tail in the Netherlands, a snail in France and Italy, a mouse in China and a nautilus in Korea, but, for the whole world, it contributed to building a global village via the Internet. E-mail also contributed to the democratization of business. Small entrepreneurs were keen to focus on niche markets via e-mail marketing, working under the radar of multinationals and thereby opening the possibility of an economy with a longer tail. Roh Moo-hyun, then a presidential hopeful and a small entrepreneur in the field of politics, would cause a twist in the 2002 presidential election against political mogul Lee Hoe-chang on the basis of ardent support from young Internet users who pleaded with each other to vote for Roh.
But the enhanced convenience of civilization usually comes with a price. The Internet encyclopedia Wikipedia defines three problems of e-mail: spam and phishing the leakage of personal information and viruses. However, there is one thing that is feared more than anything else: the invasion of privacy. For longer than anyone can remember most people have stopped exchanging honest words via company e-mail accounts. Indeed it is often rumored that a company executive once had to resign because emails sent to a member of his female staff contained information about their love affair.
Also in the limelight are the e-mails exchanged between a high-profile Blue House official and a former university professor. It is likely to develop into a scandal of so-called “inappropriate” affairs. It must be an entertaining dinnertime topic for busybodies, but it is also a horror story for Internet users called “netizens” who exchange dozens of e-mails every day. Suppose that some deleted e-mails are restored to screw up your life in the same way the “I love you” virus ruined computers. Some conclude that we do not have any privacy anymore and that the price of sacrificing our privacy has become too great.