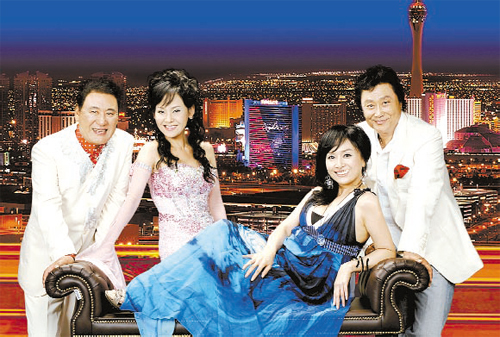 From left: Hyun Cheol, Kim Soo-hee, Park Hye-mi and Nam Jin are the four singers that will be performing “Show Musical Fantasy” until the last day of the Chuseok holidays. Provided by MBC

“Show Musical Fantasy,” which will be staged from tomorrow afternoon until the last day of the Chuseok holidays on Sept. 26 at Jangchung Gymnasium, Seoul, is not the usual musical that many of us know.
The musical fantasy is actually a concert by four singers who will perform popular old-time Korean trot and famous musicals on a set that resembles a flashy dinner show in Las Vegas.
This show is clearly targeted to the generation of people in their 40s and 50s.
Nam Jin, Park Hye-mi, Hyun Cheol and Kim Soo-hee are the singers and performers. It is hard to say if they would appeal to a younger audience, but the two male performers, Nam Jin and Hyun cheol, are known for breaking the hearts of ajummas in Korea for many years.
MBC, the national broadcasting network company which organized the special Chuseok event, said the show was in fact themed “filial piety,” and “family.”
The singers will be performing in a variety of genres.
Nam Jin will be singing songs ranging from old-time Korean songs like “With You” and “If I had a Lover,” to classic rock such as “You are My Destiny,” and “Hound Dog.”
Park Hye-mi, who recently appealed to a wide audience when she played a major role in a sitcom, will be returning to her roots as a musical singer. Park will be belting out songs from “The Phantom of the Opera,” “Mamma Mia,” “Cats,” “New York, New York,” “Grease,” “Dream girls” and “The Lion King.”
Hyun Cheol will be performing old-time Korean trot, including “Bring Back My Youth, Sit or Stand,” “My Thoughts are All About You” and “Love Must be a Butterfly.”
Kim Soo-hee will be singing more exuberant songs with powerful energy such as “A Train Heading South,” “Flower of Passion” and “You who I Met by Chance.”
MBC said 100 million won ($106,500) was invested in costuming.
Nam Jin will be dressed as Elvis Presley, while Park Hye-mi will be in Mamma Mia, Cats and Lion King costumes. Hyun Cheol will be dressed in outfits resembling those of the Lido show in Paris and Kim Soo-hee will wear modern Korean attire.
Tickets range from 33,000 won to 99,000 won. The show will not be available on Mondays.
For more information call (02) 368-1515 or visit www.imbc.com.