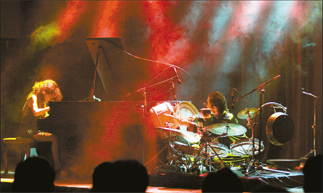 A seasoned shaman, will perform at the exorcism performance festival. The festival will offer jazz and rock, above, mixed with traditional exorcism music. Provided by the organizers

Shamans dancing barefoot on the edges of knives. Exorcism rituals. Rock and jazz fused to traditional sounds.
From tomorrow to Sunday, the first festival of its kind focused on Korean shamanism and its exorcism dance will be held in Gyeonggi.
Seasoned shamans like Kim Mae-mul will present an eight-hour exorcism performance, including the knife dance. Plus, overnight on Saturday into Sunday morning contemporary rock and jazz musicians will become filled with the spirit and perform with the shamans.
The Friday performance in Suwon is to bring tidings of good luck and prosperity to the audience, said Park Heung-ju, the festival organizer and director of the Kut (a Korean word for an exorcism performance) Research Institute. “Shamans can dance on the knives when they are possessed by the spirits, and there is no scientific explanation for this phenomenon,” Park said. “You just have to believe what you see.”
Park is keen to welcome an international audience to experience something perpetually fascinating to outsiders. “Shamanism and North Korean issues” are the “two most popular topics for the expatriate community in Korea,” Park said. When possessed, the shamans speak with the voices of the spirits, and the audience can ask their fortunes, he said. If you don’t speak Korean it would be good to bring a Korean-speaking friend for the fortune telling, Park said.
The knife dance, however, is only a small part of the performance, which Park describes as a “synthetic art that is a quintessential part of traditional Korean lifestyle and culture.” There will be Korean music, food and dance, where the audience can share in the experience. “Korean exorcist performances communicate with the audience, and people will find themselves dancing, laughing and crying,” he promised. Following the tradition of exorcism performances, there will be a feast to be shared, including pork, rice cakes and traditional wine.
On Saturday, the festival moves to Uijeongbu. From 2 to 5 p.m. visitors can enjoy fortune telling and traditional music performances, which are to be followed by the shaman’s exorcism rituals, again including the knife dance by veteran shaman Kim.
The performances, however, will have the added color of jazz and rock bands like Crying Nut. Park said that the contemporary bands will also make impromptu performances in the exorcist dance style. The performances will continue until least 5 a.m. on Sunday, but Park said that it is likely that the spirit will fill the air and propel the performers to continue longer.

Hosted by the Gyeonggi Cultural Foundation and organized by the Kut Research Institute, Friday’s performance is at the outdoor performance hall of the Gyeonggi Arts Center. It is best reached from the Suwon subway station on Line No. 1. From exit 4 it’s a 10-minute taxi ride. Saturday’s performance is at the open grass field in front of Uijeongbu City Hall. It is best reached from Uijeongbu Station on Line No. 1. For more information about the festival, visit www.kut.or.kr. The event is free. 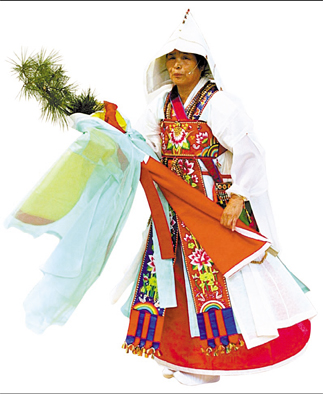