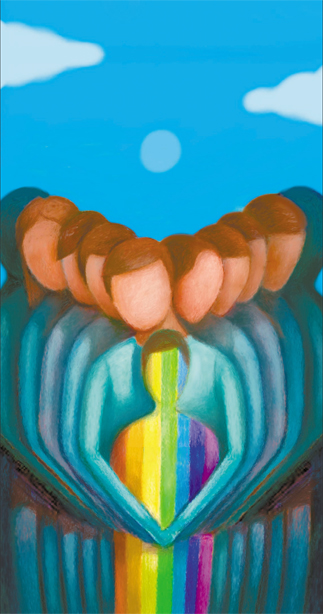 A chubby youth wearing thick black-rimmed glasses raised his hand and asked a question.
Wearing a bold, rainbow-colored shirt which contrasted with his timid demeanor and meek voice, the boy declared, “I am someone who does not like to play against the rules. I have always lived my life according to how I think I should act, as a good son or a loyal friend. But the thing is, I have always known I’m gay. I despise being different but I wonder, should I tell my parents?”
The young man, who asked not to be identified, directed his question at a panel of speakers at the first official forum for family and friends of sexual minorities in Korea, organized by the Korean Sexual-Minority Culture and Rights Center, raised a range of issues.
Woo Gong, a panel speaker, talked about his friend’s lost opportunity.
“A close friend of mine is a lesbian. Her mother passed away recently. Although she came out to her friends, she never told her mother. During the funeral, she told me that she felt as though she lied to her mother all her life and that with her passing away, she lost the chance to make it right.”
Kim Jeong-suk, the mother of a lesbian daughter, also spoke during the forum, and was adamant about the young boy’s need to come out.
“You might think that you can survive living a lie,” she said. “But I urge you to think about the life that you want to lead. After all, you are the one living your life, not your parents.”
Takako Otsuji was a guest speaker at the forum. She is the mother of Kanako Otsuji, the first openly gay politician in Japan. She raised another issue.
“In Japan, when a child comes out, the parents become loners because there is nobody that they can go to for support,” she said. “Among friends, suddenly, you become an outsider with nothing in common.”
Kanako Otsuji, the youngest person ever to be elected to the Osaka Assembly, came out of the closet with a bang when she published an autobiography, “Coming Out: A Journey to Find My True Self” the day before the Tokyo Pride Parade in 2005. 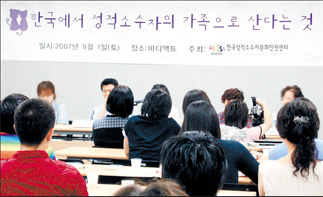 Participants listen to panel speakers at a forum for family and friends of sexual minorities in Korea, organized by the Korean Sexual-Minority Culture and Rights Center.

She marched with her mother and both of them have been prominent gay rights activists since then.
The Otsuji mother-daughter team created their first support group for the family and friends of sexual minorities in 2006, when a mother with a gay son contacted them after hearing about Kanako’s coming out.
“It becomes terribly difficult for family and friends of sexual minorities to find companionship and support,” Takako Otsuji said. “Even more so than the sexual minorities themselves, which is why we organized this group.”
At present, Korea’s stance on accepting the culture and addressing the social rights of sexual minorities has amounted to not much more than a few symbolic gestures, although small steps have been taken in the last few years.
One of those came in June 2006, after a ruling by the Supreme Court, people who have undergone a sex change operation can legally register as a member of their new sex.
There is, however, one snag in the provision, as far as equality is concerned.
“There is a small notation on my social security card which indicates that I am a transsexual,” said one participant at the forum. “This makes it doubly difficult for me to find a job or meet people.”
Transsexuals seem to attract the biggest public scrutiny.
Transgender entertainer Ha Ri-su’s marriage to Micky Jung this May caused a furor among the Korean public.
The couple, who had starred in a reality show on cable television earlier this year featuring their everyday life, endured harsh criticism from the public with a deluge of Internet postings mocking their lifestyle.
Many family members at the forum acknowledged that the public’s attitude toward gays has been changing in Korea, while transsexuals still live more of an underground life.
“When my sister told me she was a lesbian, I automatically had visions of fashion-forward, chic, independent gays and lesbians from television dramas. This was not the case with my sister,” said Kim Hyeon-jeong, another forum speaker, whose humorous approach had participants laughing.
However, some participants had a hard time getting amused, because their personal stories had been so painful.
“They are outcasts living in the dark,” said the mother of two transsexual children. “One child was very good in the arts and also a good student. However, because of the harsh treatment she received in school and at various institutions, she gave up on her studies.” 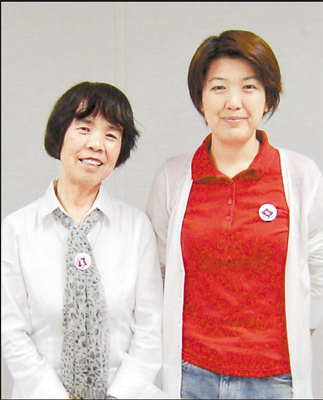 Takako Otsuji (left) and her daughter, Kanako. By the organizer

Of OECD countries, seven currently allow same-sex marriages including the Netherlands (the first country to allow same-sex marriage in 2001), Belgium, Canada, South Africa, Spain and the state of Massachusetts in the United States.
As of 2006, South Korea ranked 12th in the OECD charts for GDP according to the International Monetary Fund, with $888 billion.
However, many progressive groups have protested that the nation’s commitment to equality and human rights has not kept pace with its enhanced economical status.
Although Canada and Spain are the only countries that provide the same legal status for same-sex marriages as opposite-sex marriages, other countries including Israel, the United Kingdom, Finland, Denmark and Switzerland allow civil unions which offer a registered partnership recognized by the government with the same legal benefits as marriage including inheritance, separation settlement and health benefits.
In some countries, adoption rights are also granted in civil unions.
Korea, on the other hand, along with Japan, does not recognize same-sex marriage or civil unions.
“In Korea, sexual minority couples pay their taxes and serve mandatory military duties but are not granted basic welfare from the government,” said one gay participant. “That is why so many gays and lesbians turn to opposite-sex marriage.”
For many parents of sexual minorities in Korea this financial inequality creates the biggest worry of all concerning their children’s future.
“I couldn’t look my child’s teacher in the face [when confronting the teacher about her daughter’s sexual orientation],” Kim Jeong-suk said. “I want my daughter to have the same rights as anybody else for a financially independent life and the same education as any other child. It got too hard for her though, and this year, she will be enrolling in an alternative school.”
A mother who has a transsexual son who hasn’t undergone a sex change operation addressed the welfare issues that her child confronts.
“My son is in middle school. Like most Korean kids, he is adept at the Internet and has been gathering information concerning legal rights in countries for transgendered people,” she said.
“He told me that he wants to go to the Netherlands and make a living. I don’t want to be separated from him at such a young age but I think I may have no choice. He can’t have a normal life here. If he goes on to work for a company in the future, he will certainly be discriminated against.”
The close-knit family-oriented society is another hurdle for sexual minorities in Korea.
“I haven’t told my sister or other relatives that my daughter is a lesbian,” Kim Jeong-suk said. “My sister lives five minutes away from my house and is very close to my family but it’s unimaginable for me to tell her.”
“My family is very close. We have relatives visit all the time,” said Kim Ji-young, a high school student with a transsexual older sibling. “My brother [after a sex change operation] was featured in a documentary on TV. This was a big blow to my family. My relatives are treating my family like pariahs. I haven’t even told my mother that I would attend this meeting; she would not understand.”
Choi Hyeon-suk, head of the sexual minority committee at the Democratic Labor Party, said the focus of these meetings should “not only be emotional support. That’s a given. This forum should be a starting point to use our collective power to make legislation to help this community in the long run.”
She added, “Family is important but so are our basic rights.”