Ginseng in a town time left behind

Ginseng in a town time left behind 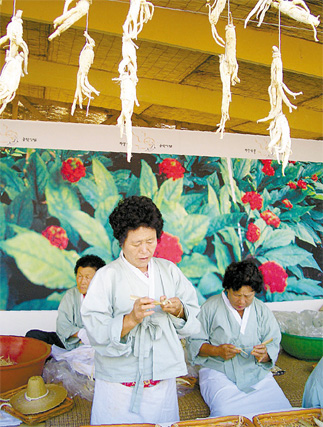 Volunteers at the festival dry ginseng.

Gindex in Geumsan, South Chungcheong, came to life with a flood of visitors at the peak of its annual Ginseng Festival last weekend but the rest of Geumsan was a ghost town.
The main four-way intersection in front of the central bus station looked like an abandoned railway line, something out of a grim 1950s science-fiction flick. There were no cars in sight, only a faint trail of sand swirling in the wind above the unpaved roads. At the nearest bus stop hung a large poster promoting last year’s Geumsan Ginseng Expo. It had holes and a row of six old ladies sat on the bench below. Wearing blank stares, they waited quietly for the bus.
I am used to reading in the papers about Korea’s aging society and how rural areas are becoming overwhelmingly populated with senior citizens, but a face-to-face encounter with the phenomenon was bleak nonetheless.
The diverse demographic in Seoul feels like a cacophony from time to time, but as I walked through the barren streets of Geumsan, stripped of rudeness, chaos and the reckless vigor of youth, I couldn’t help but feel uneasy in this desolate landscape with its seemingly disenfranchised inhabitants.
It was as if nothing had ever happened in the town, yet everything was already over. 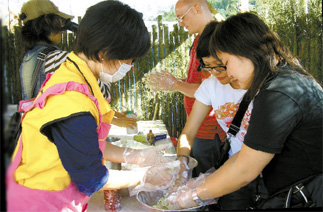 After about a 20-minute walk from the station, my companion and I reached the edge of the festival, starting from the International Ginseng Center. It was about four o’clock, and the vendors stalls were buzzing with local families, old men searching for bargains among the health and stamina food vendors and foreigners eagerly looking through pamphlets.
The festival has been held 27 times in Geumsan but last year, thanks to the accompanying Ginseng Expo, the area enjoyed record-breaking numbers of visitors.
There has been a boom in local festivals in Korea ever since the mid-1990s, featuring regional specialties.
Last year, more than 1,150 festivals took place, 763 of them starting after 1996. The Ginseng Festival is one of the most popular.
This festival in particular serves as a great source of income for the region as it is mainly a shopping festival at its core. There really was nothing much to do but shop for ginseng.
Granted, there were “interactive” booths featuring activities like cooking with ginseng and digging for ginseng.
At other booths, you could make your own ginseng soap or participate in a ginseng drawing contest. Even with all this fuss, the programs were uninspired and disorienting. The booths were merely small-time distractions on the way to the real deal ― the ginseng shopping booths where ginseng-related products were piled like mountains. The owners were courting customers, handing out samples of ginseng. 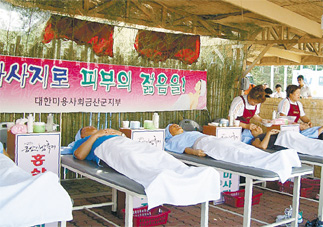 One of the most annoying parts of the festival was the music. It would have been appropriate for traditional Korean music, or even trot, to come out of the speakers, but the organizers somehow decided that techno/dance music, which was trendy in Seoul nightclubs 10 years ago, was the perfect fit.
Worrying that pieces of my brain would explode in pain, I sought out the food booths to anesthetize myself with a bit of beer.
My companion and I also ordered a ginseng bibimbap (boiled rice mixed with vegetables) and ginseng pancakes (with seafood and green onions). Maybe I was numb from disappointment in the festival, but I couldn't taste the ginseng in either of our two dishes. The bibimbap could have come from the cafeteria in my office building, for all I knew.
It was a shame that a festival, aiming to promote Korea and a rare item that has the potential to be an internationally popular health food, failed to bring any style or sense of legitimate Korean culture into the mix. Korean ginseng has always been valued as being superior to other kinds, including those from China. 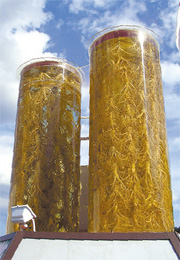 Giant see-through silos near the front of the festival grounds holds ginseng. By Cho Jae-eun

However, like many other local festivals, the ginseng festival did not do justice to the item it was promoting. Marketing or promotional strategies were noticeably absent.
At around dinner time, my friend and I went to our pension, a private lodging house where every room has its own kitchen, and made a small meal with ingredients we brought from Seoul.
The place was called Hu Hu Land Pension, but aside from the questionable name, it was a lovely little three-story escape in the foothills of Mount Cheontae.
A small stream ran through the front yard beside the outside barbecue and after dinner, we decided to roll up our jeans and dangle our feet in the water while taking in the crisp mountain air.
While giggling at my friend’s jokes, I felt the change of the seasons in a gust of wind that swept over my shoulders and regretted not bringing a cardigan.
At the central bus station the next morning, waiting for my ride back to Seoul, I saw a woman with three boxes wrapped in cloth heading in my direction and I decided to help her carry them.
I asked what was in the box and she replied, “It’s ginseng for my son and his family. I live here, but they are in Seoul.”
After a few questions and answers, I worked up the courage to ask her if she is bored or lonely living in this town. 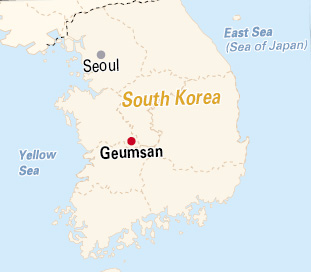 “I was brought up in this town and will probably die here. I don’t think I will ever be able to leave because I don’t know anywhere else,” she said.
I got on the bus after a few minutes and took a last look around. Coincidentally, I thought I recognized a lady whom I had seen waiting for a bus when I arrived.
Seeing her at the same bus stop as the day before, wearing the same blank stare, it felt as if someone had hit a button to put the town on pause.
It was a few minutes before the roar of the bus engine sunk in that I realized I was moving again.

Where to stay, what to see and how to buy ginseng

Geumsan Ginseng Festival
The Geumsan Ginseng Festival started in 1981 to introduce Korean ginseng globally. During the event, visitors can purchase various ginseng products at Gindex, formally called the Dongwon and Geumsan International Center of Ginseng Distribution. The items range from raw ginseng, ginseng powder, ginseng wine and cosmetics made from ginseng. The center is located in Sindaeri 678, Gensan-eup, Geumsan County, South Chungcheong. It is open from 10 a.m. to 6 p.m. For more information, call (041) 7540-4091.

Accommodation
Hu Hu Land Pension
There is only one official hotel in Geumsan, and pensions are usually the safest bet for visitors who want an affordable and pleasant stay. One is Hu Hu Land Pension, which commands a good view of Sinan Creek. Prices range from 70,000 won to 200,000 won per night. The pension runs a shuttle bus for guests’ convenience. For more information, call (041) 751-4470.

Chilbaekui Chong
Another tourist attraction in Geumsan is Chilbaekui Chong, the tomb of 700 martyrs who fought in the Korean militia against 15,000 Japanese soldiers in Geumsan during the Japanese Invasion in 1592.
They all died, including the leader, Jo Heon.
Along with the tombs, there is a memorial put up in 1603, and Jongyong Temple, which was founded in 1647.
Chilbaekuichong is located in Uichongri 216, Geumseong-myeon, Geumsan County, South Chungcheong. Hours are from 9 a.m. to 5 p.m.
Admission is 300 won for students under 20 and 500 won for adults. The site closes every Monday. For more information, call (041) 753-8701~2.