From left to right, all in Hongdae: 16 mm, a music bar that often plays old pop songs; a flea market; and Jeok, a Japanese-style sake bar. [JoongAng Ilbo]

Critics are calling it the rediscovery of Northern Seoul. For years, the image of Gangbuk, or Northern Seoul, has been that of a rigid, old-fashioned part of town that falls well short of the urbane sensibility and trendiness of the southern part.
While the south side has the image of being home to people with new money, fancy education and lots of access to Western culture, the north side is more known for wealth built through the generations, a place where traditions and familial values are important.
Those perceptions are changing, according to industry experts, as an increasing number of young Koreans see the North’s grafting of tradition and modernity as being uniquely stylish and cool.
“You have to wonder why more and more young Koreans these days upload pictures on their blogs of their excursions to hanok cafes in the north, eating waffles under a giwa roof, instead of photos of them drinking coffee at posh modern cafes in Gangnam,” says Beck Una, the chief editor of Magazine T, Internet publication for drama and pop culture for young Koreans. “That’s a major shift compared to the past, when popular TV Korean dramas were always set in the south. I wouldn’t call it nationalism, but the younger generation has come to realize that it’s more precious when Korean traditions meet outside cultures as opposed to simply mimicking Western trends. In a way, young Koreans today are more confident embracing their traditions than their parents’ generation.”
Hongdae people say they see dingy eateries, cheap drinks and grungy outfits as hip and arty, because they inherit the edgy spirit and underground culture that was once nourished by artists and musicians who were the area’s first settlers. They also believe that Hongdae culture is confident enough to ignore competitions over brands and class.
The great divide in taste and spirit on the two sides of the river in Seoul can be seen in the atmosphere of their many cafes, restaurants and clubs.
Deep in Gangnam, in the early hours of Saturday morning at the underground bunker that is The Spot, one of the city’s hottest new booking clubs, waiters were busy escorting young women to rooms where men eager to get set up sat on posh sofas ready with hard liquor at their table. 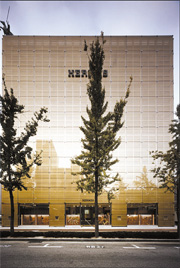 A banner on the wall of a ladies’ room read: “Female visitors who do not want ‘booking’ ― or on-the-spot dating ― should contact the front lobby and wear a neon band on their wrist.”
Across town in Hongdae’s Club Tool, about onefourth the size of The Spot, the floor was jampacked with young house dancers, both men and women. Neighboring clubs holding date auctions and ladies’ nights were also crowded.
The Spot was undoubtedly trendy. Noted as a celebrity hideaway, it features a sprawling lounge with beach chairs surrounding a large pool. It also features karaoke rooms, with the sounds of acid trance music mixed by popular foreign D.J.s.
Club Tool has manifested an edgier reputation over the years. The club’s banner wears a slogan reading, “Keep it underground.”
The styles and costs on the two sides of the river vary widely, as well.
At The Spot, the ladies were dressed to impress, many clad from top to bottom in dressy designer outfits or their equivalent. At Club Tool, a mix of grunge, semi-casual and hip-hop made up the high fashion.
South of the river, a minimum course for the night starts at 40,000 won ($42.75), featuring a set of beers and assorted fruit. Up north, a cover charge of less than 10,000 won gets a bowl of shrimp crackers and a drink. The visitors danced until dawn.
At neighborhoods south of the river such as Cheongdam-dong, giant complexes of restaurants and cafes cater to high-end clientele willing to pay more. In Hongdae, the cafes and restaurants are much more personal, both in scale and taste.

The Spot, a club south of the river with a swimming pool inside. By Ahn Yoon-soo

ritics trace the cultural roots of southern and northern Seoul to New York City and Shibuya, the capital of Japan’s urban youth. New York, linked to southern Seoul, represents a trendy and more refined style, while Shibuya represents an originality rooted in the Japanese tradition, like Hongdae with its own Korean style.
Regardless of their differences, critics say, in a major shift, the younger generation of Koreans increasingly see the contrast between the north and south as more a matter of style than class.
“It’s a healthy sign that trends in the north and south have each developed in ways that mark their distinct colors over the years,” says Lee Gyeong-min, a hair and makeup stylist who has shops both in Hongdae and Cheongdam-dong. “It’s a fine balance as opposed to the past, when practically the whole idea of trend came from the culture south of the river. I think the north’s advocates have really made visible efforts to create a unique style by adding modern standards to Korean tradition.”
Perhaps movies and television dramas have had something to do with the recent trend. The popular drama series “Coffee Prince Branch No. 1,” which was partially filmed at Mount Nam in northern Seoul, which had rarely been represented in past Korean dramas, made part of the plot focus on urban, Bohemian-style baristas who opened a cafe in Hongdae.
“Gangbuk had long been stigmatized as a cheap and crowded side of town,” says Beck, the editor of Magazine T. “The phenomenon you are seeing now is an interesting shift of perception, which I think is more than a passing trend.”
In marketing their cultural brands, experts explain that areas like Hongdae succeeded in stimulating the interests of art-minded individuals who prefer smaller shops and restaurants hidden from the crowds, to quietly visit or play around on their laptop.
“They managed to push for kitsch interiors and exotic menus where visitors can enjoy a homely atmosphere at a relatively low price,” says Kim Eun-jo, the food critic and editor of Blue Ribbon Survey, a restaurant guide in Seoul, referring to Hongdae customers. “The restaurants in the area are not fine dining, but they offer a variety of unusual ethnic food items you won’t find elsewhere, like a French bistro, or restaurants serving Japanese dumplings, okonomiyaki [seafood pancakes] and Western-style brunches targeted at younger visitors. The food is cheap and the style is refined, which is the area’s major asset.”
“There is the idea that if you hang out in the south you are more of a celebrity, whereas if you are in the north, you are considered more of a serious musician,” says Kim Sung-hun, the leader of Clazziquai, a popular vocal group. “In reality, too, there is just much more to explore about the culture of Hongdae than anywhere else, especially if you want to sample different music. In Hongdae, you can walk into a club, and hear everything from a guy playing a folk guitar to punk and hip-hop. You don’t get that in the south’s luxury launching parties at Louis Vuitton.”