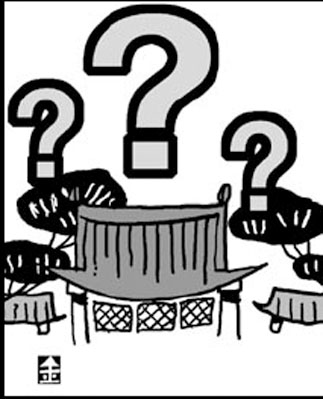 Many of China’s great dynasties collapsed quickly due to femme fatales. History has always been that way, but that hasn’t stopped latecomers from taking the same path. Indeed, the same feeling of deja vuapplies to the ups and downs of Korea’s governments, too.
The most striking resemblance between the previous governments and the current one is the arrogance. In 1999, then-President Kim Dae-jung dismissed as a “media witchhunt” the bribery scandal involving the wife of the minister of justice at the time. She received a fancy coat in return for a bribe. The wrongs of the wives of high-ranking officials were thought to simply be minor mischief. Yet it turned the public opinion upside down. The minister of justice, Kim Tae-jung, later had to resign and President Kim had to prostrate himself, too.
President Roh Moo-hyun’s allegations that the media is chasing groundless suspicions turned into a similar embarrassment. His careless dismissal of a scandal hits the very same chord as the historical precedent.
The leaders also waited until the problem became a detonating blow. Because they are all too self-important, they are unable to address the problems early on. Since right after the inauguration of former President Kim Young-sam, his son, Hyun-chul, was often snidely called the “little president.” Park Guan-yong, then the president’s head secretary, advised him to rein in the son’s behavior, but instead had to give up his post.
The head of security of the Blue House was fired for the same reason. President Roh belatedly remarked that his confidence in his own judgment has collapsed and he is having a hard time, but I fear he still has a long way to go.
Pressing the matter by taking it to the court is also another identical move to previous governments. Yon Jeong-hee, the wife of the then minister of justice, must have trusted her husband. She accused the person who reported the bribery scandal to the press of slander.
When the scandals of the son of President Kim Dae-jung were publicized, a former member of the National Assembly Lee Shin-beom was sued. And the son of President Kim Young-sam accused almost anyone of creating his woes, be it the newspapers, magazines or opposition representatives. Yet none of them surpass the current government when it comes to legal allegations. Even the former Blue House Secretary for National Policy Byeon Yang-gyun bluffed that he would take the matter to the court. Former Protocol Secretary Jeong Yun-jae, a “key aide” of President Roh now involved in the so-called Busan Gate, also sued three newspapers. However, it does not change the truth. And the growing suspicions did not snowball by themselves.