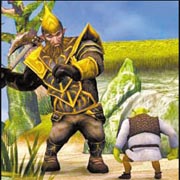 When the feature animation Shrek the Third was released in Korea earlier this year, it didn’t do very well at the box office.
But will it appeal with its game version? Shrek the Third follows the fundamental story of its feature film. Shrek travels to seek out Artie in hopes that the young nerd will take the throne of Far Far Away while trying to stop an evil coup by Prince Charming, the ogre’s nemesis.
The game takes players deeper into the story with features not found in the film. It also introduces new characters, such as the evil wooden Pinocchios.
However, the game simply fails to deliver the extra magic of bringing the obscure fairy tale alive.
The action is tedious and there is not much excitement or thrill.
There seems to be combo attacks, but making different types of sequences in the attacks hardly makes any difference.
Along the way there are attempts to make the game more than just smashing up henchmen and witches. It offers puzzles and the occasional hurling rocks at wood towers bullseyes on them.
One of the biggest problems in playing the game is its inaccurate and insensitive buttons.
The controls don’t work as intended and a player might find that his character trips unintentionally. The controls are not smooth.
The game is also not enough of a challenge.
Another irritating feature are fixed camera views. The camera follows the character whether the player plays Shrek, Donkey, Puss in Boots or Sleeping Beauty.
The fixed angle, however, makes it difficult for the player to find enemies sneaking up from behind or items such as a souvenir mug or coins, which are suggested as items to pick up. In addition, the punch lines delivered by the characters are worse than in the feature film.
Even the graphics don’t provide amusement as they seem awkward, two-dimensional and out of place. In sum, there’s no fairy tale enchantment. It needs to be harder with more humor and a larger selection of combos.
By Lee Ho-jeong

Shrek the Third
Genre: Adventure
Platform: PSP
Publisher: Activion
Rating: ★★: Rent it, borrow it, but don't add it to your collection.