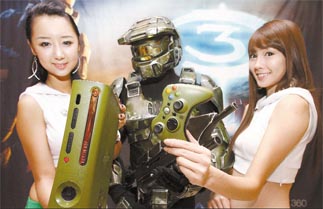 First-person shooting games, scarce on the market in the first half of 2007, resurfaced this month as game companies sent new products to the gaming public.
The most anticipated of these is Halo 3, which will be in Korea starting Sept. 28.
First-person shooting games, whether on consoles or online, have been very popular among Korean gamers since 2005.
That popularity was evidenced by PC rooms in Seoul packed with youngsters shooting at each other for hours in games like Counter-Strike.
With that kind of fan following, it is no surprise that first-person shooting games have been made into movies, including earlier games like Doom, the film of which starred with former pro wrestler The Rock.
However, the absence of a new game in the genre led to a downturn in their popularity.
According to Game Chart, an online game ranking Web site in Korea, only two shooting games are ranked in the top 10 games played in this country.
Sudden Attack ranks No. 1 with a 13.3 percent market share, while Special Force trails at No. 5 with a 6.2 percent market share.
The top ten list was dominated by Mmorpg (Massive Multiplayer Online Role Playing Game) games.
Other shooting games, such as War Rock, 2War or Counter Strike, had less then a 0.5 percent market share.
But things are brightening up for the shooting game genre.
The much anticipated Halo 3 has once again proven its powerful influence over gamers ― the first-person shooting game sold out within first five minutes after reservation sales were made available.
According to Microsoft Korea, on Monday last week 2,000 Halo 3 games were sold at online shopping malls. The company said it expects sales to reach 50,000 titles in the shortest period among Xbox 360 games.
In promoting this blockbuster game, Microsoft invited Chris Carney and Joseph Thung of Bungie Studios, the developers of the shooting game, to Korea. They came here last month.
Carney, in charge of creating a multiplayer environment for the game, met with Korean journalists.
He said Halo 3 will help increase the sales of Xbox 360 units in this country.
Halo was first released in 2001 and the sequel was released in 2004.
Carney said the third installment of the series, as well as the last of its series, will not be developed in a personal computer version. The shooting game is exclusively for Xbox 360.
Other promotional efforts can be found in hot spots around Seoul. A full-size figure of a character from the game is located at the CGV movie theater ticketing lounge at Yongsan.
Other game developers are jumping into the market as well with new products.
One of the first firms to release a new and improved first-person shooting game was EA Korea. The company on Sept. 7 began selling Medal of Honor Airborne, a personal computer version.
The WWII first-person shooting game’s Xbox 360 version went on sale Friday and the PS3 console version will be available two months from now.
Targeting the later half of this year, EA is also planning to release another first-person shooting game, Crysis, which will be available in a personal computer version.
Another highly-anticipated first-shooting game available for PS3 is Haze.
When demonstrated at an international game convention earlier this year, it received rave reviews for its unique features, such as a special knife that can make enemies go crazy.
The game is expected to arrive in Korea in November.
Helgate London is also planning a disclosed test service this month.
The developer, which created the all-time best online game series Diablo, has been working on a first-person shooting game since 2004.
Targeting the vast gaming population in this country, the company has also created a Korean character that local players can identify with.
Will these new products bring Korean gamers back to shooting up monsters and bad guys?
Only time will tell.
The answer will be found in the new features that the games offer.