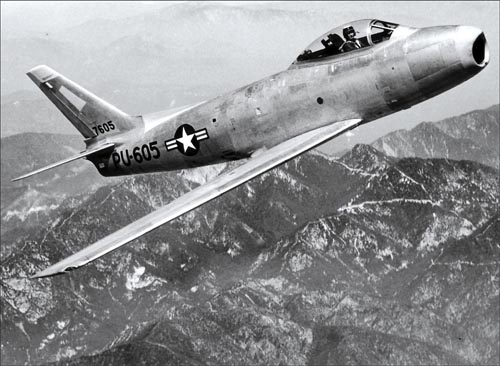 The U.S. F-86 Saber jet, shown here flying over Korea during the Korean War, was the principal fighter during the conflict, staging the first jet dogfights against Russian MIGs. [U.S. Air Force]

For the group of elderly American passengers landing at Incheon International last week, Korea’s skies were familiar, but the last time they flew them it was not in a ponderous Boeing 747, it was in the sleek fighters that fought the world’s first jet-on-jet dogfights.
The 60th anniversary of the U.S. Air Force is tomorrow, and with Korea being the first war the service fought independently ― during World War II, air units were part of the U.S. Army ― eight veteran fighter pilots returned here for a week-long tour of their former battlefield to visit U.S. troops and attend Saturday’s U.S. Air Force Ball as honored guests.
Looking back, the veteran flyers remember a lust to fly and the patriotism of a simpler time. “I certainly grew up with a strong desire to fly and began to have a curiosity about the big picture, the future of the nation,” said Col. (ret.) Edwin “Buzz” Aldrin, who would also go on to become the second man to walk on the moon.
“You had to have good eyes and quick reactions; good musicians make good pilots, as they are coordinated and have quick reflexes,” said Col. (ret.) Ralph “Hoot” Gibson. “But motivation is the key factor.”
A more unusual case was Lt. Col. (ret.) Harold Fischer who believed he had, in a past life, been a German pilot with four kills ― and wanted a fifth. He would realize his desire.
In 1950, the U.S. armed forces, softened by occupation duties in Japan and reduced from World War II numbers, were in for a shock at the savagery of the Korean War.
“We were short of people, and very short of experienced people,” said Gibson.
But there was no shortage of enthusiasm among the pilots. “We were young and stupid; we were invulnerable!” said Carl Schneider, a retired major general.
Early missions during the Korean War were flown with various instruments missing, including gun sights. Pilots slept in tents in the mud. Ground crews lacked tools.
Even so, they got results. “Our air force destroyed the North Korean Air Force in three weeks,” said Lt. Gen. (Ret) Charles Cleveland. “After that, we had air superiority.”
Sterner opposition, however, came when the Chinese plunged into the war, along with MIG 15 jets and Russian pilots. A war of supersonic duels, between American F-86 Sabers and Russian-built MIGs, began. The aircraft flew at roughly the same speed; MIGs could climb higher, but the Sabers could dive more nimbly.
Along the rugged Manchurian frontier was a 100-mile long strip of land the U.S. pilots dubbed “MIG Alley.” Beyond it lay the enemy fighter squadrons. For the American pilots, MIG Alley was the hunting ground. In the 25 minutes their fuel allowed them over MIG Alley, the U.S. pilots pitched into combat, tearing through the clouds at 660 miles per hour. Even fifty years later, the veteran’s eyes gleam and their hands mimic the motions of the dogfight as they recall their duels. 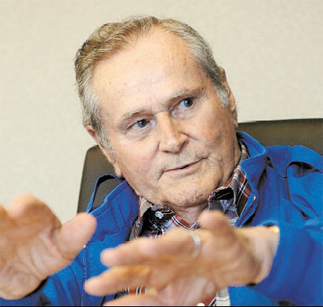 In his most successful encounter over MIG Alley, Gibson was leading eight Sabers when he spotted tiny specks and condensation trails: 50 MIGs.
“We met ’em head on. I started a right turn to maneuver behind one, I barrel-rolled behind their ‘tail-end-Charlie.’ He was about 1500 feet ahead; I engaged, and got a couple of bursts on him.” His Saber vibrated as Gibson fired. He kept one hand on the throttle, the other on the control stick, with its gun trigger. He could see his rounds impacting, pieces flying off the MIG, then his wingman joined the attack. The MIG fell.