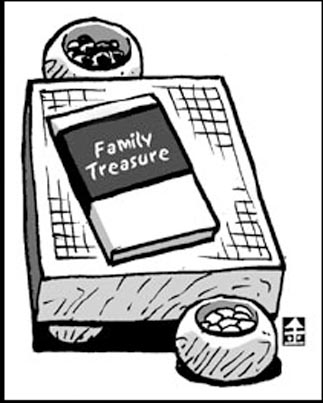 It was Segoe Kensaku who accepted Cho Hoon-hyun, who entered the professional baduk scene at the age of 9 in 1962, as his disciple. But Segoe’s training style was unique. What he first made Cho do was shovel the snow piled up on the ground. He usually made Cho do chores and did not teach him baduk at all. When this type of treatment continued, Cho’s father finally wrote a letter to Segoe protesting.
Segoe’s answer was polite but strict. “Baduk is about manners and morality. To be able to play high-level baduk, one must first equip oneself with a higher capacity. For this, training one’s personality and character must come first.”
Segoe concentrated more on teaching the basics than sophisticated fighting skills.
He especially emphasized keeping records of the game. He disliked dirty records. He taught Cho that even when losing a game, one should do so gracefully. Those are the manners and aesthetics of baduk.
For three years, Cho Hoon-hyun learned the virtue of self-restraint. Only after those years was Cho able to make his debut at a Japanese baduk club. Years later, Cho’s father confessed that “Segoe’s teaching made Hoon-hyun what he is now.”
If there is the beauty of “withdrawal,” there is also the beauty of “stepping in.” According to the Analects of Confucius, it was not that Confucius did not like to show off his talents, but that he was a person who waited for someone who really acknowledged and appreciated his talents and needed him to share his time and patience.
Just two days after Japan’s Prime Minister Shinzo Abe shared his thoughts in order to “promote revolution strongly” during a live television broadcast, he resigned from his position.
The reason he resigned is not yet clear. However, through this incident, Japanese politics have suddenly become chaotic. If it were Cho’s teacher Segoe, he would have said, “Aren’t you afraid of the records ― of history?”
Meanwhile, Fukuda Yasuo, a 71-year-old politician, is likely to be the next prime minister of Japan with the support of the majority of his party and the Japanese people.
A year ago, when the young 51-year-old Abe announced he would run for the premiership by saying, “A new era has come,” Fukuda calmly stepped down saying, “I’m old.”
The comeback of Fukuda Yasuo, who has practiced his motto, “Restrain from the temptation of shining by possessing the light,” reminds us of the aesthetics of traditional Confucianism.