Gangsters in love and actors who diet create a comeback

Gangsters in love and actors who diet create a comeback 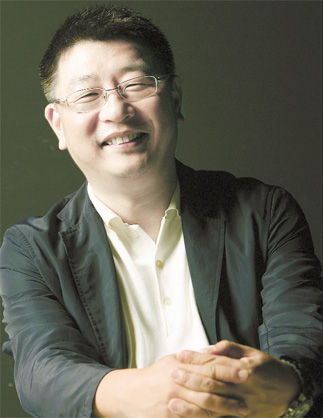 Director Gwak Gyeong-taek returns with “A Love.” By Park Jong-keun

Mainstream movie director Gwak Gyeong-taek, 41, is back on screen for the first time in two years with his new film, “A Love.”
The title itself is a big surprise for many movie fans because Gwak isn’t the kind who puts soppy love stories on screen. He is better known for directing aggressive and violent action films such as “The Champion” (2002) and “Mutt Boy” (2003).
But once the film A Love gets going it’s obvious there’s more to the story than romance.
The storyline of A Love is similar to Gwak’s record-breaking box office hit, “Friend” (2001), starring Jang Dong-geon. Characters in both films are aggressive and loyal and the script revolves around the life of gangsters who speak in rough Busan dialects ― The film takes place in Busan, where Gwak was born.
Gwak got the idea for the story while filming “Friend.” It was the life story of one of the film’s characters.
“He was the right-hand man of the gangster upon whom the movie was based,” said Gwak. “Of course he’s not involved in any violent activities now.”
Gwak even wanted to take a few days off and go to some deserted island to hear the man’s stories. Unable to do that, the friend wrote Gwak a 100-page hand-written letter about his life.
“I read it in one sitting,” said Gwak. “And that’s how the shooting for A Love began.” Thirty percent of the story is based on the guy’s real life and the rest is based on additional material.
In A Love, In-ho, the main character, played by Joo Jin-mo, is so loyal to his first love Mi-joo, played by Park Si-yeon, that he goes to prison to protect her from a gangster, played by Kim Min-jun. While in jail, In-ho loses contact with Mi-joo and, when he meets her again after a few years, he continues to protect her.
All characters in the film speak in a Busan accent and Gwak says that gives the movie more charm.
“If the characters spoke in Gyeongsang accent, the love story would have been rather blunt,” said Gwak. “And it was easy for me to find places to film, like the Taejongdae [a famous lighthouse in Busan] and Jagalchi Market [one of oldest fish markets in Korea].”
Joo is not from Busan, but he had other qualifications. “Although he was brought up in Seoul, he is a country boy like us,” Gwak said. “When Joo saw the screenplay, he realized the main character was similar to himself ― somebody searching for platonic love.”
Although Joo was a good psychological fit for the character, filming wasn’t that easy. Joo had to gain weight to film the first half of the film and then lose 16 pounds for the latter part.
Gwak said Joo’s passion for the role was essential for him to cope with the stress of the weight gain and loss.
Actor Kim Min-jun also impressed Gwak with his enthusiasm.
“Kim called me one day and said that he wanted to appear in one of my movies ― regardless of the part,” said Gwak. “He even wanted to appear as a cameo.” As soon as Gwak received Kim’s phone call, the character that Kim plays in A Love came to Gwak’s mind and he wrote the part especially for Kim.
“Casting the right characters is always difficult,” said Gwak. “Perfect timing is necessary, Kim’s call was serendipitous, it came at just the right time.”
Gwak’s approach in A Love is distinctive.
“As a young child, I was shocked by the 1940 film ‘Waterloo Bridge’ [directed by Mervyn LeRoy and starring Vivien Leigh and Robert Taylor],” Gwak said. “I could never understand how the male character could talk about the good old times when his love died because of him. I thought that unmanly.”
So Gwak decided on different approach in his film. He opts for more realism and gives tragedy its proper place in the drama.
“You could say my films are dark-colored or have deep love,” Gwak said. “Though it is hard to find such daring love in real life, there are definitely some people out there whose love is as passionate as that of the people in my films.”
Filming his can’t-live-without-each-other-love story made Gwak become more emotional.
But for his next piece, he plans to shoot a more pleasant genre, like a comedy.
“I want to direct a comedy in that makes people smile for several hours after the movie is over.”