Until death (or surgery) do us part

Until death (or surgery) do us part 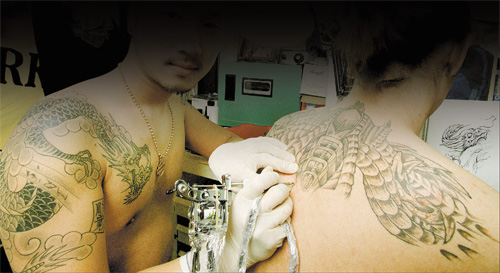 A few months ago in Daehangno, 32-year-old tattoo artist Lee Rang publicly inked the back of a friend to protest against laws that prohibit tattoo artists from practicing their craft unless they have a medical license. The protest ended in a scuffle and arrests.
In April the Constitutional Court decided in favor of a lower court ruling that said tattooing was a medical procedure.
This view is in stark contrast to other countries such as Russia, where the first International Tattoo Exhibition was held last month.
“When I tell a customer that the tattoo I’m about to do is illegal, they are surprised,” Lee said. “If young people don’t know that getting a tattoo from anybody but a doctor is illegal, it shows the older generation is clueless.”
Tattoos, or moonsin in Korean, have had a negative image for years. In the past tattoos were associated with criminals and gangs. When criminals were arrested some of their amateur tattoos could often be seen in news photos.
Shin Chang-won, a criminal who became notorious after an unbelievable prison break that humiliated police back in 1999, had a tattoo of a flower and a deer on his back.
However, things have been slowly changing in the tattoo community.
First the public has become more tolerant toward tattoos and more young people have been inking their skin with artistic drawings as a fashion statement or a form of self expression. The younger generation doesn’t see tattoos as something appalling.
“In the summer the number of female customers rises,” says Lee. As a result women with small, cute tattoos have become more commonplace on beaches and at outdoor swimming pools.
Additionally, tattoo artists and their supporters have been lobbying for a change in the law.
At the end of August a photo exhibition featuring tattoos was displayed in the lobby of the National Assembly building in Seoul. The exhibition was organized by law maker Kim Choon-jin, a member of the Health and Welfare Committee. Kim told reporters that the exhibition was designed to break the negative image of tattoos and advance freedom of expression.
The lawmaker, a former doctor himself, said there are approximately 500,000 people in Korea with tattoos and roughly 500 tattoo artists.
Apart from his public tattoo performances, Lee and a few of his fellow tattoo artists have walked from Jeju to Seoul via Busan, Daegu and Chungju, to advocate greater freedom for tattooists.
Along the way people signed a petition supporting a repeal of the tattoos law. On July 13 Lee handed the petition to the National Human Rights Commission. Lee has also participated in public debates.
Choi Gyu-jin, a doctor with the Korean Federation of Medical Groups for Health Rights, who participated in one debate, said tattooing is not a medical procedure but a work of art that requires sanitary precautions.
The doctor added that he had no worries about infections as long the tattoo needles were not recycled. He said it would be more effective for public hygiene to ban people from kissing.
Kim Wan, a member of Cultural Action, a civic group which supports Lee, criticized the legislation that defines tattooing as a medical procedure. Kim argued that only when tattooing is legalized would formal sanitary regulation, which doctors and legislators insist upon, become practical.
Park Gyeong-cheol, spokesman for the Korean Medical Association, the biggest organization that opposes the legalization of tattooists, has repeatedly told the Korean media that tattoos can spread infections like HIV. Park claims that Europe, where tattooing without a medical license is legal, has seen numerous cases.
He also says that there have been reports of cases where ink used for painting cars has been used in tattooing.
Lee refuted such claims. He said hygiene was an issue that has been entirely misinterpreted.
“This is an issue of self-consciousness,” Lee said. The tattoo artist said each needle that has been used once is replaced with a new needle before he draws on someone else.
“The needles only cost 1,000 won and usually it takes just a single needle to complete a small tattoo,” Lee said. “Do you seriously think tattoo artists are recycling needles just to save such a small amount of money?”
Lee operates in Hongdae where he has a small studio on the top floor of a three-story building crowded with restaurants, bars and a real estate agency. The building is unmarked and Lee’s studio looks likes a hip, funky pad.
The wall is painted black with a drawing of two naked women who have tattoos on their backs, the only hint of what really goes in the office.
Lee said the other tattoo studios in Seoul are unmarked and most are in his neighborhood.
“There are about six stores that I know of just a few steps from this building,” he observed.
So how do customers find these stores?
“It’s easy to find us,” Lee said. “Some locate us through the Internet or are introduced by another customer who had their tattoo done here.”
The tattooist said there are no tattoo studios that display a sign saying “tattoo” on their front door.
“A famous store in Hongdae does piercing in front, which is legal, but when their customers want a tattoo the owner takes them to another office some distance away,” Lee said.
Like other tattooists Lee says that if the legislation could be reformed, the tattoo business, which currently operates underground, could surface and do business in a better and more closely regulated environment that could benefit customers. 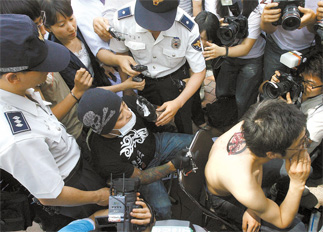 Police arrest Lee Rang in Daehango, Seoul for tattooing in public without a medical license. By Park Jong-keun

“Not only would the price of tattoos become more transparent, allowing customers to get tattoos at the appropriate price, but the hygiene issue would be more systematically controlled,” Lee said. “Currently even the authorities don’t know exactly how many stores are operating. If the business becomes legitimate the government would have a better chance of safeguarding public hygiene.”
The tattooist says he has only been working for a change in the law since the beginning of this year. He says he took up the cause and began fighting against the current legislation because no tattooist has previously come out and taken such a public stance.
“No one else wanted to carry this burden but working in a non-legitimate situation there have been cases where tattooists were being threatened and forced into situations in which other people could manipulate us,” he said. “I thought this had to stop and that is why [this year] I decided to focus on getting the public to take notice of our problems.”
Lee said it was not too long ago that he also had a conservative view of tattoos.
Before becoming a tattooist five years ago he worked at a small company that exported fabricated goods in Itaewon.
“Working in Itaewon helped to widen my perspective,” Lee said.
Growing up in a small town in Gyeonggi, Lee was raised to believe that tattoos were for gangster and criminals.
“But in the streets of Itaewon I saw many foreigners with breathtaking tattoos,” Lee said.
He got his first tattoo after he quit his job at the company, which struggled after Korea’s customs regulations were tightened when Incheon International Airport opened.
“Sitting at home one day I decided to get a tattoo,” Lee recalled.
The first tattoo he got was a scorpion on his right shoulder.
At first he was afraid to show it in public and would hide it. He said he started to take interest in tattooing as a living because it seemed like an interesting job and he needed money. He said it wasn’t easy for a guy who only graduated from high school to land a good job at a time when even those with higher degrees were being fired because of the financial crisis.
Lee first tried to learn his trade from another tattooist, but soon discovered he had not learned very much despite spending a large sum of money. So he began to study on his own.
Even today, he said, he was takes art classes so he can raise his work to a higher level and improve his techniques.
Lee never refers to himself as an artist. He said the term “artist” should be reserved for a select few tattooists who are the best and truly deserve the name.
He refers to himself as a tattooist.
Lee is happy to stay in Hongdae, whatever the state of the legislation.
“Here there are a lot of people with visibly exposed tattoos walking along the street,” Lee said. “I really don’t stand out in a crowd but if I go to another neighborhood, like Apgujeong, people stare at me as if I am uniquely different.”
Lee said he has experienced prejudice when entering restaurants in parts of town away from Hongdae, where the staff will not look at him directly because they fear he might be a gangster.
He can feel whether people are talking behind his back or staring at him because of his body markings.
“A few years ago I was afraid to use the subway because I could hear people talking about me,” Lee said. “Nowadays I really don’t care and just take the public transportation.”
Lee said because of his tattoos he has suffered other forms of discrimination.
“I used to swim, but when I went to several indoor pools to register, they told me to find somewhere else,” Lee said. “Public swimming pools don’t care if I have a tattoo but private indoor pools tend to discriminate.”
Lee said tattoos should not be seen as a form of fashion. He said a person who is considering getting a tattoo should think the decision through since tattoos are not like an in-vogue garment that somebody can easily slip on and off.
“A tattoo is something permanent,” Lee said. “We tell our customers to really think about what they are about to do.”
Lee said he knows his fight isn’t easy, especially as he is battling a huge organization like the Korean Medical Association.
“It is like throwing an egg against a rock,” Lee said, citing an old Chinese proverb. “Who will the government side with? A small group of people with no real power behind them, or a large and influential organization?”
Still, Lee said he was not going to give up. “What I am doing right now may not make a significant difference but it will help things change just a little bit,” Lee said. “All I want is for people to recognize our art for what it is, or at least turn their heads, even if it is out of curiosity, to see what we are trying to do.”