Bringing the past back to the future

Bringing the past back to the future 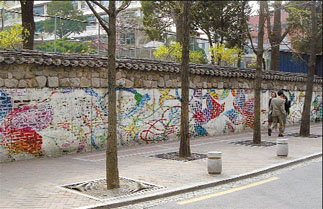 The streets of historic Jeong-dong have become more than a memory in a new exhibition titled “Brave New World, Flowers Bloom” organized by the Seoul city government. The area will be revived in this long-term public art exhibition that opened last Wednesday and includes everything from murals and installation art to interactive booths and a listening bench where visitors can tune in to radio programs of the past.
The program is a part of Seoul’s City Gallery project, which was founded to promote public art, starting in four areas ― Jeong-dong, Bulgwangcheon, Mangwon-dong and Sillim-dong.
Since the spring the city has recruited companies to support the project and the two chosen to help organize the Jeong-dong exhibit are Rochers Design Co. and Community Design Research Center.
Artists including Yu Bi-ho, Kim Dae-sung, Shim Uh-chan and No Name No Shop, have participated and there is media art by Paik Nam-june, provided by the Gyeonggi Cultural Foundation. The exhibition will continue until late October, while some media art from the exhibit will remain in the area for five years or longer.
Jeong-dong has always been a historic area for the city with buildings like the Gahoe-dong House where the infamous Ulsa Treaty between Japan and Korea ― which gave Japan the power to take over Korea’s diplomatic relations ― was signed. 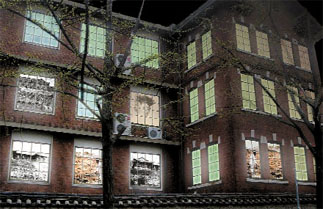 A Jeong-dong light installation by Shim Uh-chan. Provided by the organizer

The Jeong-dong exhibition is divided into three: “Flowers Bloom,” “Observe” and “Remember.” The first will feature murals, planters full of flowers and the Take-out Garden where visitors can plant their own flowers.
“Observe” will include a light installation, posters featuring local historical events and examples of signboards that have disappeared over time.
Forgotten traces of Jeong-dong will appear in “Remember,” which includes a listening booth titled “Radio Jeong-dong” and a sound installation by Lee Jin-won using old phone booths.