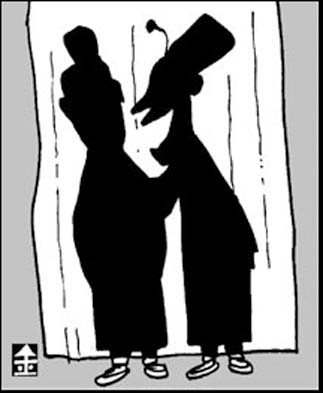 In a poem by Nam Gu-man (1627-1711), the poet exhorts a boy seemingly indulging in last-minute sleep to wake up with the songs of birds that break the dawn, reminding him of the mountain paddies he must tend today. In the same poem, the image of the east window receiving the freshest daylight with the rising sun relates to the start of a busy day that shows the vitality and hope of life.
However, the east window holds a different image in China, as it appears in a story of Yue Fei, who was a famed general of the Song Dynasty and a national hero of China. He, however, was murdered because of false charges invented by his political opponents while fighting against the Jurchen armies of the state of Jin.
Qin Kuai, the man who drove Yue Fei to death, planned to kill him, but even a notorious political plotter like Qin had to hesitate because there were many voices defending the loyal general. The wife of Qin Kuai approached her susband when he was pitching different plot ideas under the east-facing window. She took a shovel from the fireplace and wrote in the ashes, “Easy to release a tiger, difficult to arrest it,” ― in other words, kill Yue Fei as soon as possible.
Qin Kuai was also a mortal man and died of senility. His wife was shocked, however, when she asked a Taoist guru how her husband was doing in the afterlife, for Qin was going through every punishment imaginable in Hell because of the immensity of his sins. Meeting the Taoist guru in the afterlife, Qin did not forget to send regards to his wife: “Please tell my wife, sir, our plans made under the east window were all revealed.”
The proverb that says, “The affairs under the east window will be revealed,” which means one’s plotting has been discovered by others, is said to have originated from this episode. The laymen’s worship of the hero added fictional characters to historical facts, making the story almost like a legend.
But what is noticeable here is the different perceptions of the east window between Korean and Chinese people.
However, nowadays many of us seem to find the east window burdensome as well, since those whose lies and wrongdoings were disclosed to the public duly fear the break of dawn.
Those involved with the Shin Jeong-ah and Chung Yun-jae scandals must feel like that, but it is not confined to these people. The continuing scandals render Korea the “Republic of Corruption.” Our image of the east window may change to the Chinese one ― a reckoning for a society where morality has fallen.