A vacuum cleaner sucks up applause

A vacuum cleaner sucks up applause 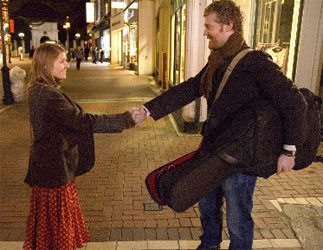 Marketa Irglova, left, and Glen Hansard endear themselves to each other, and the audience, through their music in “Once.” Provided by Samson Films

Forget Bob Fosse, the glitter and the random songs awkwardly shoehorned into the plot. This is a musical of a different breed.
“Once,” John Carney’s film about two musicians on the streets of Dublin, never gleams with the veneer of over-production like too many movie-musicals released in the past few years. Instead, this film grips viewers with a welcome dose of reality.
Staying true to its Irish roots, the film maintains its distance from the perfection of Hollywood.
No one is introduced in a flashy scene of exposition; instead, the viewers feel as if they’ve stepped onto a cobblestone street corner, where a young man known only as “the guy” (Glen Hansard) plays covers on his guitar for spare change on the street.
From here, his unbridled musical passion and a broken vacuum cleaner spark an unlikely friendship between him and a young woman, “the girl” (Marketa Irglova).
Interrupting him in the middle of one of his sets, the girl, in what the audience learns is her typically inquisitive, friendly way, coaxes out details of the guy’s life. As it turns out, he repairs vacuum cleaners ― or “Hoovers,” as the young Irishman charmingly calls them ― and the girl has a broken one.
The next day, she reappears, dragging her vacuum cleaner down the street. Throughout one day, vacuum in tow, the two tenuously forge a musical partnership that becomes the basis of the film.
Dublin appears gray and gritty through Carney’s lens, yet gradually reveals its coastal beauty and Bohemian spirit. In the same vein, while neither Irglova or Hansard have looks that would warrant a second glance, they appear refreshingly real to an audience too familiar with flawless faces. In time, Irglova, Hansard and Dublin lend the story a subtle dose of charm.
Their characters, too, have lives and responsibilities far less glamorous than viewers would typically care for: both live with a parent, suffer from past heartbreak and are lonely for company their own age. Irglova’s character hops between odd jobs, from selling flowers on the street to cleaning homes. Yet despite the hands they’ve been dealt in life, the two manage to endear themselves to the viewers ― and each other ― in a relationship that dances between platonic and romantic.
Unlike typical musicals, in which songs serve to move the plot forward, the tunes here offer insight into the personalities of the two main characters.
While watching Hansard and Irglova ― who are real-life musicians ― play, their complementary aspects shine. Hansard belts out his songs in emotive, cathartic fashion, and Irglova’s clear, ethereal voice delicately harmonizes alongside; the result is a tender, poignant melding of sound that etches its way into the audience’s brain. Likewise, the contrast translates into the visuals, with Irglova’s statuesque stillness and composure and Hansard’s constant motion in the form of head bobs and knitted brows.
Instead of magically pulling perfect songs out of thin air, Once gives insight into the process of crafting music. We watch as Hansard heartbreakingly composes yet another breakup song while watching old home videos on his computer of himself and his ex-girlfriend, whom he can’t get over. In another scene, Irglova walks along the street composing lyrics to one of the guy’s tracks, pausing occasionally to scribble down her thoughts. Once the guy decides to record a CD in hopes of landing a record deal and winning back his ex-girlfriend in London, the two scrape together a band of other street musicians and hit a studio. For one track, with their meager resources, Irglova crouches on the floor to accompany the band with the silly electronic demo on a tiny keyboard.
For all the struggles that the film depicts, it also conveys so many of life’s joys, which somehow become all the more accessible because of the characters’ imperfect lives. It tells us that we don’t have to be phenomenally beautiful to find happiness, that we don’t need a lot of money to follow our dreams and that sometimes it’s the simple everyday interactions that change our lives. And like life, not everything in Once works out the way we want it to ―but this makes the film all the more perfect.