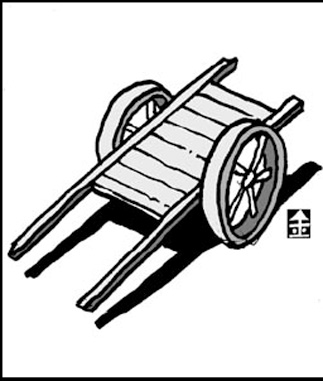 In March 1956, then President Syngman Rhee announced he would not run for a third term, saying, “As I am more than 80 years of age, I reckon it is right to retire now.” After a while, 800 horse- and oxcarts were mobilized to support Rhee’s third run at the presidential office in front of the Blue House. Adjacent streets were full of the smell of horse and ox manure.
Oxcarts carried voters until the 1970s, at least in rural areas. When the transport system was not yet fully established, it would not have mattered what carried the voters, be it an ox-cart or a cultivator because in many cases, voters chose a particular candidate because they had been given a pair of rubber shoes and a bowl of thick rice liquor in return for their vote.
It was the 1987 presidential election when the mass mobilization reached its apogee. Instead of oxcarts, tourist buses were hired to send people to the political gatherings of contending parties. Nevertheless more voluntary participants appeared at the gatherings of the opposition party, in line with the still-alive passion of the June movement for democracy. However Roh Tae-woo, then ruling party presidential candidate, had by far the largest number of supporters among the candidates. Indeed buses and subways proved more efficient as a mobilizing tool than oxcarts.
The primary of the United New Democra-tic Party also has an issue with “oxcart mobilization.” Under the name of a national primary, the party enrolled lists of voters with boxes of registration papers and mobilized them to the primary via buses. The previous four regions of the primary election show that the surviving three candidates are not free from suspicion that they mobilized people for their votes. Otherwise it does not make sense that less than 20 percent of those who allegedly volunteered for the electoral college of the primary came to vote and that a majority of votes went to particular candidates depending on their constituency. If the party argues that political events have always been carried out on the basis of public mobilization, then they must be right. However, if they knew this was going on, they should not have put on a political show claiming their party primary was genuine.
But you never know. Who would have thought that Syngman Rhee would order voters to support an independent candidate, Ham Tae-young, instead of Lee Beom-suk of the ruling party four days before election? Is presidential hopeful Sohn Hak-kyu trying to work that sort of surprising turnover by the “invisible hand” behind the election by hiding himself from the public eye?