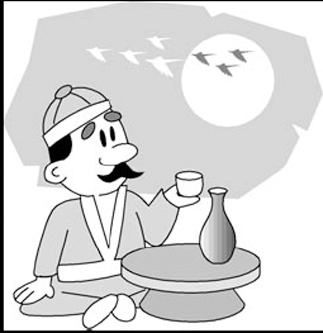 The pleasure of visiting norae-bang (karaoke) in Chinese cities is doubled by the pleasure of encountering lyrics adapted from ancient poems. Such is the case with the song “Wishing we Last Forever,” sung by many famous Chinese singers, such as Deng Li Jun and Teresa Teng.
The lyrics derive from a work by Su Shi, a k a Su Dongpo, a legendary poet of the North Song Dynasty who is counted as one of the top five poets in Chinese literary history. Su Shi wrote the poem, missing his little brother, Su Zhe, after the poet was demoted from the court and sent far away. Thanks to the ideogram, which wholly conveys the meaning of the lyrics regardless of the 900-year time gap, we can still appreciate the poem.
Su Shi thought of his brother as he looked up the full moon of Chuseok, the harvest day. “How long a time has the moon been there/ I ask the clear sky with a glass in one hand,” he said, paraphrasing a line from a poem by another immortal poet, Li Bai: “I ask the moon with a glass in one hand.”
Su Shi is called an Immortal Poet, as was Li Ba, who was regarded as a Taoist god descended on the mortal world. Thus, he once wrote, “I wish I could go back to the moon by the wind, but too high the moon is for me to bear with coldness ... what in the moon will be the same as in the human world indeed?”
In another moment, “The moonlight turns around the red pavilion and beckons at the silk door, gently caressing the wide awake sleeper.” Su Shi was pining for his brother and missing everyone he knew. Why is it that under the full moon people always think of those who are far away? To pine for somebody seems natural under a full moon.
The highlight of the poem lies in the next lines: “Men have sadness and happiness, separation and encounter/ the moon shines and then in shadow, ascending and descending.” Comparing the cycles of the moon to the start and end of human relationships, the poet observes, “To have both has been historically difficult,” foreshadowing the possibility of pleasure followed by grief. The portfolio of Su Shi likewise comprises a positive attitude toward life: while seeming infinitesimal against nature, let us enjoy this life.
Now the moon goes down again. Fatigue dominates our journey home from heavy holiday feasts. It is a pleasure to go to one’s hometown, but hard to come back. Nonetheless we can hope that happiness awaits us just as the eclipsed moon comes back to its full shine. Comparing our lives to nature is a joy of this world. Let the fatigue after a long holiday be assuaged in this way.