Granny makes a soup that simmers for Pusan cineasts

Granny makes a soup that simmers for Pusan cineasts 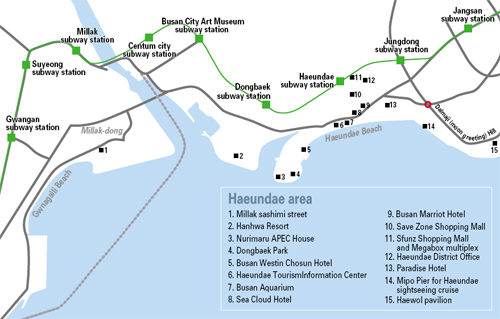 BUSAN ― Korea’s second-biggest city is famous for it’s annual movie feast. The Pusan International Film Festival (or PIFF) has grown to become the most prestigious in Asia. But what does Busan have to offer by way of edible treats? Even cineasts can’t function properly on an empty stomach.
Busan sits in South Gyeongsang, a province that is not particularly famous for its food, especially in comparison to its neighbor, South Jeolla. However, with the right guide it’s possible to discover that Busan deserves a better reputation in terms of delicacies.
For the first few years I attended the film festival, I mostly resorted to safe choices like chain restaurants or fast food outlets, using lack of time and a tight screening schedule as my excuse. 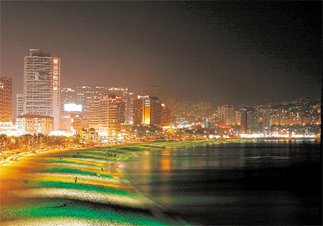 However for hungry festivalites knowledge is power, especially for those who want to enjoy good food at budget prices in locations close to the theaters.
Park Joon-pyo, a Busan native and a publicist for the festival, claims that it is possible to come to Busan and be a cinephile and gourmand at the same time.
Busan, known as Pusan when the film festival was launched, is a port city and thus offers many delicacies from the sea, from sashimi to blowfish soup to noodles with raw fish.
However, Park claims that Busan has more to offer than just fish and seafood. From gukbap, or rice with soup, at 2,500 won ($2.72) to bowls of noodles that cost less than 4,000 won per serving, Park offered a lengthy list of gourmet and affordable restaurants.
That being said, I decided to check for myself. I came, I saw and I ate delicious and affordable meals at restaurants that boast secret recipes that have been handed down through several generations. For me and my companion our research was an excuse to gobble six meals a day with dessert and coffee, all at under 50,000 won for two. Here are some selected restaurants where you can have a quick, hearty bite in between the latest thrills of PIFF.

From the top, Busan’s delicacies include hoeguksu, or noodles with raw fish slices; gukbap, or rice with beef broth; wonton soup; sundubu, or spicy tofu soup and bokguk, or blowfish soup. By Chun Su-jin 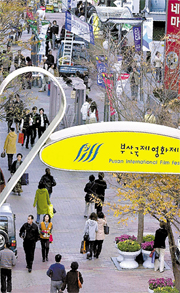 Nampo-dong area
There are two major sites for the film festival, Nampo-dong and the Haeundae Beach area, both of which have clusters of film theaters. After a three-hour bullet train ride from Seoul, the best place to start is Nampo-dong, which is two subway stops from the KTX station. The area has two main PIFF venues, Daeyoung Cinema and Busan Theater, located in a neighborhood called PIFF Square.
My first destination in the area is Halmae Hoeguksu, or Granny’s Noodles with Raw Fish, (051) 246-4741, on Gwangbok-dong street in the Nampo area. A humble bowl of soft, flour noodles come with several slices of gaori, or ray, with assorted vegetables and a secret spice based on pepper paste.
The spice has a deliciously pungent flavor and if you feel any pain on your tongue, you can always try the soup made from kelp and anchovy, whose recipe is another restaurant secret. The restaurateur is indeed a grandmother, who was too shy to be named, and she has been cooking here for more than 50 years. A single bowl of noodles costs 3,500 won. Find the Nampo Bookshop or the Daks Golf Store that are in the vicinity of the restaurant, or just ask a passer-by about Halmae Hoeguksu, like I did, and you’ll be given directions.

Right next to the raw fish noodles place, there is another restaurant offering a must-eat Busan delicacy, known as milmyeon. The word translates as “flour noodles” but that mundane term does not capture the full dimensions of milmyeon, which are pleasantly chewy when served in a good, cold soup. There are quite a few milmyeon restaurants in Busan, and the one right next to the raw fish noodle place is called Halmae Gaya Milmyeon, (051) 246-3314, and it offers a bowl at 4,000 won. The chewy texture of the noodles reminds people of naengmyeon, or cold noodles, a specialty of North Korea, made from sweet potato or buckwheat starch. The legend is that milmyeon was invented by refugees from the North during the Korean War who created it from aid supplies. Several decades later, milmyeon has its own distinctive flavor when served in a spicy soup.
Another affordable Busan must is the spicy bean curd soup at Dolgorae Sundubu, (051)246-1825, which is located amid the labyrinth of the Gukje Market in the Nampo area. The restaurant’s name translates as Dolphin Bean Curd Soup (the restaurateur was puzzled when I asked “Why dolphin?”) and it serves a big bowl of rice and a small pot of boiling bean curd soup at 2,500 won.
If you don’t have time to walk a few blocks away from the theaters, then you can try the 18 Wandangjip (051) 245-0018, right across the Busan Theater. Opened in 1947 and specializing in the Korean version of wonton soup, the place offers thin wontons in a special kelp and anchovy stock, priced at 4,000 won. Busan can be quite chilly in early October, and this bowl of hot soup with its smooth wontons is just the ticket. The stuffing is pork, ginger, garlic and other vegetables, but the real secret is in the several oriental medicinal herbs that the restaurant uses.
Another Nampo area must is a visit to the Jagalchi Fish Market.
This is a good dinner place after a long day at the movies. The fish market, about a 10-minute walk away from Nampo-dong, has a crowd of vendors selling a wide variety of fish, alive and flapping, and visitors can select one and eat it nearby as fresh sashimi. A survey around the vendors last weekend suggested that the best delicacy for early October is jeoneo, or hickory shad. Bargain with the vendors if they try to charge more than 15,000 won per two people. 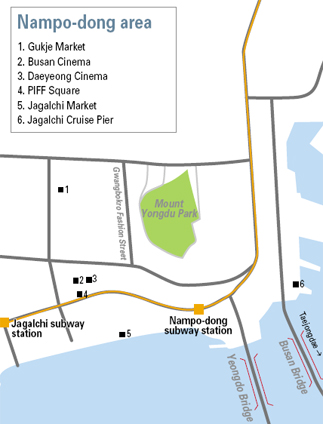 Haeundae Area
The Haeundae area may be best known for its beach, which enjoys a deluge of vacationing families in the summer. However, it becomes a cinephile playground during PIFF and affordable delicacies abound. The No. 1 food is gukbap, available at a cluster of restaurants close to the Megabox theater. With more than 40 years of service, Halmae Gukbap, or Granny’s Rice with Soup, has perfected the dish. Film festival publicist Park describes this as “the best meal ever in Korea, or perhaps in the world, for this price.” He was not lying.
The restaurants here serve two kinds of soup, one with beef broth and the other with broth and seonji, or clotted cattle blood, which is believed to be a good dietary supplement. I tried the beef broth and could understand why so many Busan locals go there for a hangover remedy.
By now you must have realized that many restaurants have “granny” in their names as a way to publicize how old they are. Halmae Bokguk, (051) 747-7625, or Granny’s Blowfish Soup, is another one in the genre, located at the Mipo Pier. The restaurant is a humble place yet has a wide range of fans, including PIFF director Kim Dong-ho. The price differs depending on the kind of blowfish ― the lowest is offered at 7,000 won and is quite pleasant on the palate with a warm soup and plump fish.
Blowfish soup is a beloved Busan delicacy and a high-end version can be enjoyed at Geumsu Bokguk, (051) 742-3600, and Chowon Bokguk, (051) 743-5291, in the Haeundae area. The two places have relatively grand settings and offer a wide range of blowfish delicacies, from soup to sashimi.
If you don’t like blowfish, then try rice with assorted side dishes including fried rolls of hard-boiled egg and fish, all at 5,000 won, right next door to Granny’s.
Meanwhile, if you are at the film fest with your loved one, a stroll over the Dalmaji Gogae, or Moon Greeter’s Hill, is a good choice for a romantic evening after a feast of films.
A brief taxi ride from Haeundae Beach, the hill has a cluster of cafes that overlook the ocean. The Haewol Pavilion on the hill is a place where you can pray for eternal love.
If you want a some beer or wine, pay a visit to the Kyungsung University area.
About nine subway stops from Haeundae Beach, the area is known as Busan’s version of Seoul’s Hongdae area, famous for its clusters of bars and clubs. Club Monk, (051) 622-2212, offers live jazz music every night except Sundays. The area also has dance clubs like Vinyl Underground, (051) 628-0223, which is known for being friendly toward expatriates.

The best way to get to Busan is by train, rather than by air, because the airport sits in the suburban city of Gimhae outside of Busan. It takes about 2 hours and 50 minutes for a KTX bullet train to travel from Seoul to Busan. The first KTX train leaves Seoul Station at 5:25 a.m. and there are two to three departures per hour, with the last departure at 10 p.m. during weekdays and weekends.
Train service from Busan to Seoul begins at 5 a.m. on weekdays and the last departure is at 9:50 p.m. On weekends the first train is at 5 a.m. and the last is at 9:30 p.m. The weekday one-way fare is 47,900 won and on weekends it rises to 50,700 won. There are other types of trains that take longer but are less expensive. The Saemaeul trains take about five hours and cost 39,300 won one way and Mugunghwa trains take about six hours for 26,500 won. For more information, call the Korea Railroad Corporation service at 1544-8545 or 1544-7788.
Once you get to Busan, the subway is available for a basic fare of 1,100 won. If you plan to take subway rides more than three times a day, a one-day pass is available that offers an unlimited number of rides at 3,500 won a day.
It’s a rather unexciting subway ride from Nampo-dong to Haeundae Beach. One way to make it more memorable is to take a cruise, if weather permits. There are several cruise ships that tour Busan’s tourist attractions. For a cruise departing Mipo Pier of Haeundae area call (051) 742-1106. For cruises departing Jagalchi Market area near Nampo-dong, call (051) 441-2525.