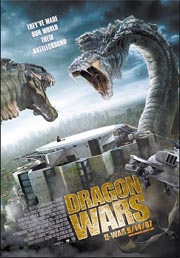 The poster for D-War in the United States. Provided by Showbox

HOLLYWOOD ― When Kim Ki-duk’s “Spring, Summer, Fall, Winter ... and Spring,” acclaimed as a beautiful Buddhist pastoral film, screened in American theaters in 2004, it came and went as quietly as the secluded lake where it was shot. It was a typical arthouse release ― about the norm for Korean films here.
“D-War” has been the polar opposite. The poster for this Korean action flick was plastered on what seemed like every other bus stop the weekend of its release. The film’s imugi serpent towered over Hollywood on a building-sized billboard. And marketers for the film, in smart “D-War” windbreakers with banners tucked under their arms, brought clips from it to fan conventions all over California.
Now it’s finally here.
To see it I took a walk down Hollywood Boulevard past the tourists taking photos of silent movie star Mary Pickford’s concrete handprint and through the famous doors flanked by stereotypical Chinese warriors bearing spears. Where better to see “D-War” than at Grauman’s Chinese Theater, a monument to the Golden Age of Hollywood, when Asia was a romantic stereotype far from California?
Two hours later, I caught up with a few of the roughly one dozen people in the theater with me. The verdict? A couple there on a date concluded that “it was cool,” but most echoed the harsh verdict of the Korean (and now American) press.
“Almost so bad it was funny,” said one American filmgoer.
“Almost?” I asked.
“Almost,” he replied.
“I came because I’m a fan of Asian cinema. We actually imported the Korean DVD of ‘The Host’” before its American release, he said. “I’m a fan of monster movies because I grew up watching them, and I’m a fan of bad sci-fi because I grew up watching that, I liked Barbarella,” he said, referring to Jane Fonda’s sexy 1968 B-movie sci-fi romp. “But this was just a mess.”
That widely shared opinion has had an impact at the U.S. box office, where “D-War” made just $8.8 million since its opening Sept. 14 through Monday ― huge if it had been a Korean art-house film, but unlikely to offset the astronomical costs of marketing a wide release. It fell from 5th place to 10th in one week in box office sales.
Another viewer had just one thing to say. “It was awful, but still better than ‘Transformers.’”
That echoed the best review of the film in the American mainstream press, on TV Guide, which called the movie “no dumber than Transformers.” Metacritic.com, which scores all reviews on a scale between 1 and 100, said the aggregate for “Dragon Wars” was 33.
The New York Times’ Andy Webster opens his review by calling the film a “breathless, delirious stew,” and adding, “it’s impossible not to be entertained, provided ... you have a sense of humor.” Those lines proved irresistible to the movie’s marketers, who are using them in TV spots running on television in Los Angeles.
The Los Angeles Times’ Robert Abele was harsher. “Hyung Rae Shim hastily unloads the back story like a sorry poker hand,” he wrote. In the end he concludes that “12-year-old boys will be happily hypnotized by the full-throttle imagining of downtown L.A. laid to waste,” and “Michael Bay will wonder how it was done impressively enough for a fraction of the budget of his ‘Transformers.’”
My brave audience comrades agreed that it was fun to see their city clobbered, though one noted, “It was funny to see one scene in one place and another right afterward all the way across the city.”
But when I walked back out into the crisp Hollywood evening I could only recall the review by the American satirical newspaper The Onion, which called the narrative “incoherent,” with “a bevy of irrelevant characters doing irrelevant, awkward things ... All the thought seems to have gone into the marketing, and none into the unfathomably terrible script.”