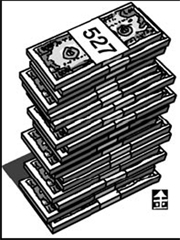 A few days ago the Citizens’ Solidarity for Presidential Elections undertook a movement to force the withdrawal of the campaign pledge to construct canals across the Korean Peninsula. Yesterday another NGO, the 2007 National Solidarity (Preparatory Committee), denounced this publicly. So-called civic organizations fight more fiercely than political parties during elections.
These organizations are called “527” groups in the United States. To put it simply, they are NGOs specializing in political campaigns. In the United States, the organizations are tax-exempt as stipulated in article 527 of the U.S. tax code.
The 527s can also assume the role of bad guy. They are not regulated by the Federal Election Commission, and candidates do not have to bear much responsibility for their activities. Thus campaign commercials that vilify rival candidates are often produced by such organizations. The groups are not supposed to collaborate with a specific camp, but the rule is skin deep. Most members of these organizations have previously worked with political parties.
Korea is no different from the U.S. in this sense due to its history of democracy struggles. At one NGO, one in three executive staff members have assumed high-ranking public office. The current “participatory government” is participated in not by ordinary citizens but by executives of civic organizations. Negative campaign strategies by NGOs also resemble the U.S. style, for newspaper advertisements by right-wing organizations and Internet assaults by left-wing organizations do not seem to have any restrictions at all.
The national primary process made these organizations more influential than before, for they could affect primary results in the name of citizens. In consequence, some NGOs even receive funding from specific candidates. Such problems arise because the party organizations are weak in and of themselves. Political parties in Korea have been mobilized downwards by elite politicians. However, when the money source is restricted, such a top-to-bottom way of mobilization no longer works. Party members who are accustomed to the convention would not vote without money.
An attempt to select only genuinely committed party members for the Electoral College disappeared in search for a fancy name ― the national primary. Therefore it is nearly impossible to prohibit political activities of non-political organizations. Since this is the case, perhaps we would be better off if we clarified the lawful procedures of participation and observed limitations.