A makeup artist who dares to dream

A makeup artist who dares to dream 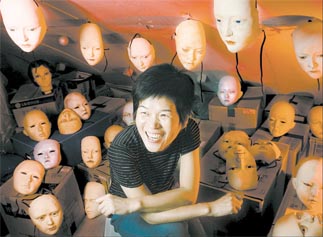 Hwang Hyun-kyu, a 49-year-old special effects makeup artist, still remembers how little money her team, Mephisto, received for working on the Bae Chang-ho film “Love Story” in 1995.
The team worked around the clock for four months and received only 5 million won ($5,430).
Hwang was shocked by the low pay, especially considering that she holds a master’s degree in journalism from Ewha Womans University and a doctorate from Ludwig-Maximilians-University of Munich.
“Since Korean society emphasizes an educational background, I thought I would be given credit for studying abroad,” Hwang said. But that wasn’t the case. Holding a Ph.D. was impractical for Hwang as a makeup artist.
Pondering two careers - a professor or a makeup artist - Hwang chose the road less traveled.
“I always dreamt of becoming a film producer or a film critic,” said Hwang. After graduating from Ewha, she worked on two of Bae Chang-ho’s films, “The Winter the Year was Warm” (1984) and “Whale Hunting” (1985).
“Little did I know that being engaged in the film industry was tough,” Hwang said.
“People appeared to communicate one thing but meant another.” Disappointed by the reality but not able to let go of her long time dream, she decided to study abroad in Germany.
“Expressionism was rooted in Germany during the early 1990s,” Hwang said.
“German arts were influenced by the expressionist movement, which sought to convey intense emotion as realistically as possible.” In the avant garde culture of expressionist art, makeup arts developed naturally - especially in films and plays.

“The Munich school offered open lectures on special effects makeup,” Hwang said. “I love talking to people and getting to know them.”
Hwang said creating a different character using makeup takes heart and soul, and she enjoys her work.
Fascinated by the new field of study, Hwang decided to attend the Mephisto School for makeup effects. She worked as a staff makeup artist for Claudia Armborst’s film “Der Fehler” in 1993. The next year she worked in makeup at the Theater im Palais.
Excited by her new vision, she returned to Korea after 10 years of living abroad with a new career - makeup special effects artist.
But the overall environment and reaction in Korea was not encouraging.
“My parents were disappointed with me and wanted me to become a professor,” Hwang said. “They said being a makeup effects artist in Korea was an insecure job.”
Despite her parent’s opposition, at age 32 Hwang created her own team called Mephisto, based on her art school experience in Germany. But still shocked by the low pay and the hierarchy in the film industry, Hwang fought for several years to elevate herself to a better position.
“When I was struggling, I promised myself not to bring out my academic achievements,” Hwang said.
She wanted to start fresh at the grassroots level. But she soon faced a limit - “No one was interested in makeup artists unless there was something special about you,” she said.
In an effort to appeal to the public, Hwang decided to address her academic background and take a stand against the low wages. She rejected work on films that offered too little money. Hwang’s friends tried to convince her that as a novice in the field, every job should be appreciated as a chance to leap forward.
But to Hwang, earning self-respect and reasonable pay was more important to build her future. She managed to pull her company to the top of its field and was soon called the little giant on the set and surprisingly received 1.2 billion won for Lee Myung-se’s “Duelist” in 2005. 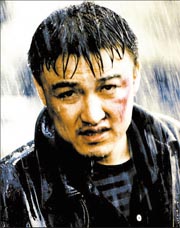 Money was not the only concern.
“Many actors and actresses put on makeup from their own beauty salons,” Hwang said. “Either actors are unsatisfied with the team’s work or there is a lack of trust between the two.”
“The team [Mephisto] becomes discouraged and is left with a sense of futility,” Hwang said. “Still, I love working with actors ― I’m a people-oriented person.”
Mephisto works in both special makeup and general makeup.
“General makeup art is more time-consuming than special makeup since you have to be on the set the whole time, but it allows you to be fully absorbed in the scenes,” Hwang said.
Hwang and her Mephisto team mold an actor into different appearances according to the movie.
For example, after the casting is done by the producer, Hwang receives the list of actors and makes decisions on how appearances will change according to their characters.
“It is up to me as to how each character is revealed on the screen,” Hwang said. “The kinds of beards, white hair, wrinkles and the wounds they have reflect the actors’ and actresses’ characters.”
“The concept of creating a character is an imitation of reality,” said Hwang. “Viewers of the movie find it most comfortable when they see familiar characters.”
Since shooting is done according to location and not time, Hwang said that a makeup artist must be organized and analytical.
“If the scene involves a character who has just fought with a gangster and is headed to a hospital, the camera can shoot the hospital scene first,” Hwang said. “In that case, we need to keep track of the wounds, such as blood color, since red becomes darker as time passes.”
Throughout her career Hwang has learned many important lessons about her work.
“In ‘Cruel Winter Blues’ [2006], there was a scene where several soccer players had tattoos on their backs,” Hwang said. Normally, it takes several weeks or even months to paint and draw tattoo on the actors’ backs.
As an alternative, Hwang came up with the idea of using sticker tattoos. Twenty sheets of large-sized black and white tattoos cost 400,000 won.
Hwang says sticker tattoos are more practical and less time-consuming. Plus, makeup artists try them on first to see if there are any side effects.
When taking off the tattoo, acetone is best for peeling off the sticky material, but it damages the skin.
“For us, actors are like living utensils,” Hwang said. “We should protect them no matter what.”
When Hwang went to Germany two years ago to visit her mentor, she helped with makeup in Frank Coraci’s film, “Around the World in 80 Days.” (Jackie Chan starred in the film.)
The makeup team was processing a third fitting session for the minor actors. (A third fitting is a rehearsal of actors trying on costumes, fixing hair and putting on makeup for the third time.)
“In Korea, there is no such thing as third fitting,” said Hwang. “Often, clothes are too big or small for the actors and makeup is done inconsistently.”
Since the early 1990s, Hwang says there has been little improvement in benefits for film staff.
“The number of makeup effects jobs offered is too low relative to the demand, it is untenable,” Hwang said. “There are around 30 domestic films released every year and a majority of scripts are offered to the top three makeup teams.
In the future Hwang wants to establish a professional makeup effects center. She also wants to open a free beauty salon, a photo studio that takes portraits for the elderly and marriage photos for aged couples.
“I want to give back what I’ve received,” Hwang said.