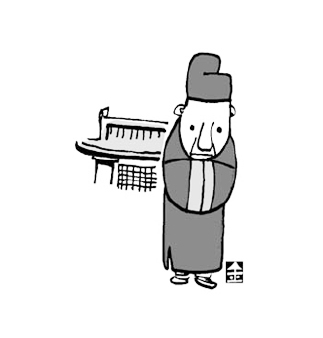 Historical sagas now dominate our TV screens. Network companies broadcast five sagas every week and they are all popular. With eye-catching state of the art computer graphics some sagas, like “The Legend of A Grand King and Four Immortals,” have won a big audience among viewers young and old.
Behind this trend lies a changing view of history with imagination as its foundation, making history a treasure trove for fiction. The popularity of faction, a combination of fact and fiction, fantasy and micro history are in a similar orbit. It represents a renewed understanding of history that rejects the previous absolute authority granted to established historical accounts.
That historical sagas tend to distort the facts is not as powerful an issue as it once was. “The King and I” suggests that Queen Yoon was the same age as the eunuch Kim Cheo-sun, although he was actually 20 years senior. Media critic Ju Chang-Yoon says that in recent historical sagas an author who emphasizes the discrete details of history gets a bigger following than scholars and historian who emphasize universality, and that the the public are more interested in amusement than historical authenticity.
The problem is that these historical dramas do have influence on people’s understanding of history. Despite The Legend’s claim to be a fantasy, the Chinese government has already expressed its discomfort because the drama highlights the Grand King who conquered large parts of what is now Chinese territory. Expectations among viewers also vary. Some are unhappy that the Grand King’s conquests now have a smaller part in the drama than previously advertised. They suspect that producers of The Legend are intentionally diminishing the achievements of a national hero, in order to get more sales overseas. On the other hand, some want the drama to have more emphasis on fantasy, instead of being a piece of nationalistic propaganda. All of this has given the producers a difficult dilemma.
What happened in the past does not itself become a historical fact, as the renowned historian Eric Carr once observed. What is important in making history is one’s choice. The same is true for historical dramas. Yet before an author makes his choice and offers an interpretation he should have some grounding in the facts. Being free from the factual anchors of history is quite different from thinking lightly of history. Recent historical dramas use real personalities from history because of the impact they have, but then proceed to create a wildly fictional version without any basis in reality. That is not writerly autonomy but careless commercialism.