A film that requires patience to enjoy

A film that requires patience to enjoy 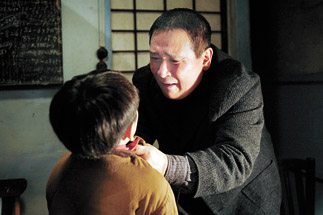 Everything goes well when you have a happy family, according to an old Korean saying. A happy family, however, can be quite a challenging goal, especially because you can’t choose your parents and children.
Korean society has long seen the clash between longtime Confucian traditions and the evolution of new ways of thinking. That has given new material to Korean filmmakers. One recent notable current of the Korean film scene is a nouveau approach that breaks away from the traditional definition of a family, from “Family Ties” (2006) directed by Kim Tae-yong to “The Shim Family,” earlier this year by Jeong Yun-cheol.
The latest in the queue, released recently as a DVD, is “Lee Dae-geun, Lee Daek-eun,” directed by Shim Gwang-jin. The Korean title is a pun on the lead actor’s name, Lee Dae-geun, which also sounds in Korean like “This family is ...” Its English title is “Mr. Lee vs. Mr. Lee.”
The lead role features Lee, an aging father who runs a stamp business alone in the country after years of working as an actor for a traveling musical troupe. The elder son and daughter hate their stubborn father and say, “You’ve done nothing for me as a father.” The youngest son is the father’s hope, but the family scatters after the son’s business goes bankrupt and the mother dies because she can’t afford surgery.
After decades, however, the father brags to his fellow villagers about getting an invitation from his children for an annual memorial service in Seoul. The son and daughter indeed greet their father. He waits for the youngest son to come back, then asks a private investigator to find him. However, there is an air of awkwardness in the family reunion for a family that has been at odds for so long.
This is why it takes a bit of patience to fully enjoy Mr. Lee vs. Mr. Lee. (Skip the rest of the paragraph if you plan to see the film.) The son, daughter and their spouses are all actors, hired by Lee, to act in the memorial service for his wife. Then the director shows the tragic truth of what happened to the father’s real children. One of the actors says, in a line that is the core message of the film: “I’ve been doing the job of acting as an ideal family member, but I still don’t understand the true meaning of family.”
Shim’s idea for the twist should have added spice to the film. The premise, however, somehow falls flat, as viewers are perplexed and bored for the first half of the film watching the awkward family reunion. Some sequences are shot in black and white, and the message from the director is too troublesome for viewers to take the time to understand. He should have worried less about the twist and concentrated more on the chronological storytelling to make the most of his message that asks what the meaning of the family is.
In one scene, the eldest daughter clashes with the two U.S. soldiers after a traffic accident. The director allocated quite a few minutes to show the two soldiers teasing her husband and trying to flirt with her, which seems to have nothing to do with the film’s theme. The sequence appears intended only to arouse a nationalist reaction from the Korean audience.
The film still offers a notable and interesting look on the definition of family. There could be such an industry mushrooming in the near future that satisfies the ideal obsession for a happy family. The scene where Lee signs the contract to pay the actors’ fees was particularly poignant.
The actors, meanwhile, give stable performances in their roles, and the lead actor Lee is the jewel in the cast.
English subtitles are passable, except for minor mistakes such as typos. The subtitles digested Korean cultural elements to make sense in English, by expressing “high school third grader” as “the 12th grader.”