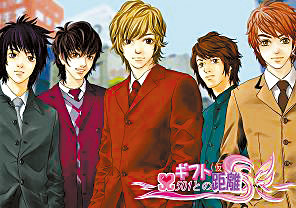 At the Tokyo Game Show 2007, the Korean game developer Nexon Mobile made the surprising announcement that it has made agreements with three major Japanese mobile communication companies, Softbank Mobile, KDDI and NTT DoCoMo, to sell cell phone games to subscribers.
Nexon is best known for its all-time hit, Kart Rider, an online racing game.
At the game show in Japan that was held a week before the Chuseok holidays, Kwon Joon-mo, chief executive officer of Nexon Mobile, said “This is the first time a Korean mobile game has been directly serviced by three Japanese telecommunication companies.”
Since April, Nexon Mobile has been directly selling several mobile games, including a version of “Maple Story” and “Board Game Party,” which is a puzzle game, to Softbank subscribers. 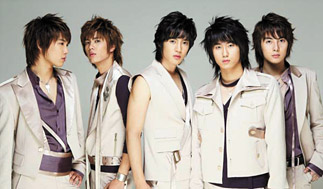 Between the end of this year and early next year, Nexon Mobile games will be available to KDDI and NTT DoCoMo subscribers.
According to Nexon Mobile, Japan has the largest top-quality mobile game industry in the world. Last year, the mobile game industry earned 600 billion won ($655 million) ― a growth of 127 percent compared to 2005.
The mobile game industry continues to grow, as WCDMA subscribers now number roughly 100 million, more than 50 percent of all mobile telecommunication subscribers.
The Korean game supplier added that the mobile network condition in Japan is also the best in the world and that resistance to paid-content service is limited.
Kwon introduced the Korean idol K-pop group SS501 at the Softbank’s exhibition booth at the game show. 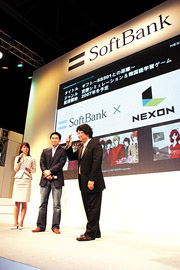 The Korean boy band is being featured on a mobile game developed by Nexon Mobile that will be sold to Softbank subscribers in Japan. In the simulation game, the player dates members of the band and learns the Korean language and customs.
“It is a fun educational mobile game where the members of the popular SS501 appear as main characters,” Kwon said. “With this game, we plan to introduce strikingly new mobile games in Japan.”
The game was developed from a proposal from Softbank. The game will be available in December.
Japan is not the only market where Nexon has been expanding its mobile games. Earlier this month, Nexon made an agreement with Samsung Electronics to sell its racing game, “Kart Rider,” exclusively on phones made by the Korean electronic company that are shipped to China.