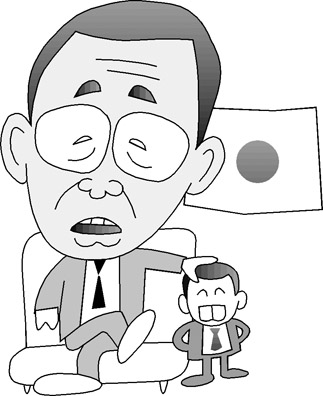 Twenty-five years ago, when I was attending school in Japan, I had a classmate who used to be called a “stationery shop’s son.”
This friend, whose name was Kiyota, was more often called the name of the stationery shop, “Yoroziya.” Another classmate, “Sase,” was a “barber’s son.” Those friends are now owners of a stationery shop and a barber shop. The shops are located exactly where there were 25 years ago. Although they graduated from Japan’s prestigious universities and many companies wanted to recruit them, these friends did not hesitate to take over their family businesses.
Nakamura Kanzaburo is one of the great names in Kabuki. The first Kanzaburo was born in 1598 and the current Kanzaburo is the 18th. The Kabuki family name has been passed on for more than 400 years.
Transmission by heredity is famous not only in Kabuki, but also in Japan’s traditional plays, Noh and Kyogen.
The reason many Kabuki actors are famous is not because they are from a famous family. Even if you are not an expert in Kabuki and just an audience member, you can feel the difference in the actors’ faces and movements. They put in much more effort than the other actors so they won’t disgrace their family. That is why the audience cheers.
In today’s world, families without talent cannot survive.
Although politics is not a traditional performing arts field, we cannot leave it out when we talk about transmission by heredity in Japan. The father of Yasuo Fukuda, the new prime minister of Japan, has also been a prime minister. Seven of 10 prime ministers since 1991 have inherited the family business. Right after Yasuo Fukuda became the prime minister, he made his son the secretary to the prime minster to prepare for the next inheritance. Even so, the Japanese do not show much dissatisfaction or discontent. If it were Korea, people would have cried out “nonsense.” Is it because since the myth of Emperor Jinmu and until now, the emperor’s title has always been handed down in the royal family? Unlike the performing arts field, where inheritance is not possible without the verification of talent, the political field has no such checkpoint.
I had this off-the-wall thought that America’s President George W. Bush, Japan’s Prime Minister Fukuda and North Korea’s Kim Jong-il could have a trilateral discussion about the transmission of political power by heredity since they have a common denominator: they all have transmitted power from their fathers.