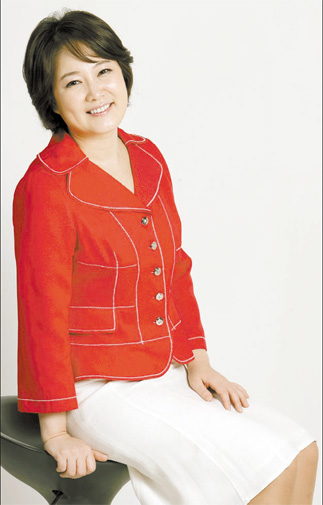 Female television announcers tend to be intelligent, thin and pretty. In today’s society, where looks are so important, an older or well-padded announcer is likely to be marginalized.
However, Lee Geum-hee is a 42-year-old announcer who is single and a tad portly but has her own charm in the form of a soothing voice and a warm character.
Since 1998, Lee has been the host of KBS’s popular talk show “Achim Madang,” (or “Morning Plaza”), which invites ordinary people to share their life stories.
It has just celebrated its 16-year anniversary and its 5,000th episode. Lee is also the narrator of the KBS documentary series “Screening Humanity.”
To Lee, hosting Morning Plaza for almost 10 years has been a blessing.
“While talking to ordinary folks [on Morning Plaza] I’ve learned the essence of life ― family,” Lee said. “I was so absorbed in work that family matters were always laid aside.”
With regret, Lee said that she has been on holiday with her family only twice during 11 years and 8 months of working. She once hosted six shows a week for 5 years and 6 months and had no days off.
“I’ve realized that you need to support your family to succeed in other areas of your life,” she said. “I’m working to spend more time with my family these days,” added Lee, who lives with one of her four sisters and her mother in Bulgwang-dong.
Listening to a guest’s heart-rending story of separation and divorce one day and a prodigy’s extraordinary tale of his talents the next is a tough task ― you need to be emotionally rich.
Lee has the know-how required.
“I try to place myself in the guest’s shoes,” Lee said. For example, she soothes a guest by saying, “It’s natural to make mistakes. If anything happens, we [the show’s staff] will be responsible.”
Lee also consoles the guests by sharing accounts of her own hard times, which were severe.
“I once pasted eyes on rag dolls to earn money,” said Lee. “All five sisters [including me] slept in one room and we only recently installed a boiler in the house.”
She remembers how happy she was to have her own desk the first day she began work at KBS.
“They [the show’s guests] are all like my mother,” said Lee. “There is no reason for me to stand on ceremony.”
Lee’s even temperament has helped her to overcome her own hardships and empathize with the show’s guests.
“I’m a happy-go-lucky person,” says Lee. “It takes me three seconds to fall asleep. Whatever I eat is delicious ― I eat well even if I’m heartbroken or sick.”
But on account of her sunny attitude, which has fed her fine appetite, her critics recently said that she was overweight and that they were uncomfortable seeing her on TV.
“It was when I hosted an MBC quiz program,” Lee said. (She became a freelance announcer in 2000.) “I thought to myself that they should mind their own business. I didn’t really care how I looked.”
Instead, she responded by saying that people with all sorts of different looks should be allowed to appear on TV.
But Lee then changed her mind. “Broadcasting is a service industry, and managing your appearance is part of the service,” she said when announcing she was going on a diet.
However, it’s Lee’s tranquil voice that attracts people most.
“Viewers say it’s hard to mimic my voice,” Lee said. She also noted that her personality has no special characteristics. “Being featureless has become my forte,” she said. “It makes it easy for people to relate to me.”
Lee compared her voice to the musical note “do.” She said that “do” is needed to create fundamental chords.
Complimenting her voice, Lee’s friends have often tried to persuade her to produce her own show under her own name. But Lee refuses.
“I’m just a hostess,” Lee said. “And I want to concentrate on the shows that I’m responsible for.” She wishes to influence others with her optimistic and joyful words.
Although, Lee has one wish ― to find her soul mate.
“I never imagined that I would become a spinster,” said Lee. “I love children and considering that I’m quite old, I would be worried about having one now. But I will definitely have a happy marriage one day, you’ll see.”