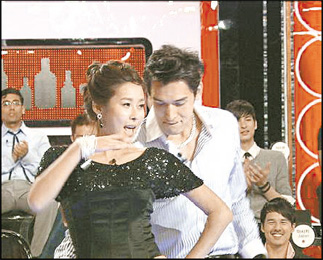 A scene from the special male version of “Chatting Beauties,” aired at Chuseok. [KBS-TV]

I come clean. I could not resist the seductive power of the “handsome guy” special of “Chatting Beauties” on KBS-TV last week. I have not forgotten my fierce strictures against the show and its group of expatriate women sharing their two cents about Korean culture. My criticisms last December, just after the show was launched, were aimed at the fact the show featured women clad in gaudy miniskirts, talking and dancing with a panel of Korean men who seemed to regard the show as some kind of group blind date. I was especially unhappy when I realized the show had become a hit.
Frailty, thy name is men, I used to say, thinking that the show’s fans must be male groupies obsessed with the “beauties.” However, I have to confess I was intrigued when I heard they were having a handsome expat guy version to mark the Chuseok holiday.
So I found myself in a state of happy anticipation last week as the 90-minute special, featuring 16 expatriate men and called “Chatting Handsome Guys,” began. I was not the only one with weak will as several gal friends of mine sent me text messages about the men during and after the show, and it scored an 11 percent audience share.
I found myself laughing, sometimes frowning and often disagreeing with what was said on the show.
After all, this male version had almost an equal dose of silliness as its female counterpart. The male version had a female panel who were in enraptured while they were dancing and examining the muscles of some of the male expats. And the men tried hard to share their feelings about Korea in somewhat broken Korean. The show had the men discuss aspects of Korean culture such as public bathhouses and the Korean women they have dated.
Some of the men went a little too far and offered some hasty generalizations, which drew fire from the local media.
In particular, the men were criticized for describing Korean women as caring too much about the job and academic status of potential boyfriends, instead of their personalities.
However, what the expats said is not entirely untrue, although it would be wrong to say that all Korean women are like that. It would also be wrong to say that only Korean women behave in that avaricious fashion.
The show’s producer, Lee Ki-weon, said that there were other controversial comments made during the show but he cut them out.
“I’ve noticed that the show inevitably draws criticism from Korean viewers,” he said. Lee explained that when the foreign panel says something positive about Korea, the show is criticized for promoting patriotism, while the panel gets criticism from other quarters when they make negative comments.
“The important thing is to have the expatriate panel members be honest about Korea and Koreans,” he said.
In that case, why do the “beauties” have to be clad in miniskirts? He paused then confessed the skirts were all about drawing attention to the show.
Despite his answer I feel the show deserves some credit for giving expatriates a chance to express their feelings about Korean culture with Korean viewers. In the past, Korean TV shows that featured expatriates were Lunar New Year or Chuseok specials and the foreigners appeared in traditional clothes, singing songs in praise of Korea’s people and culture.
Compared to that excessively cloying approach, this show at least opens the door to the greater globalization of Korean society.
Still, I don’t think I will be tuning in again in the near future. But I have to admit I was rather disappointed to hear the show’s producer say that he has no plans to air another male beauty version again soon.
I guess I will need to wait for the Lunar New Year holiday for another male special.