In search of virtue and virginity

In search of virtue and virginity 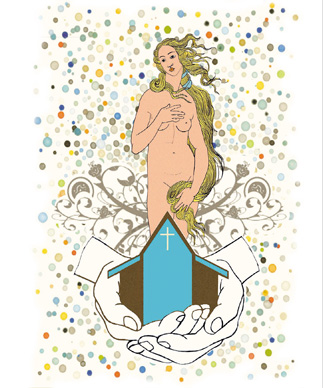 If you are a virgin, you are not cool. At least, that is what the American teen film industry would like you to think.
In the 1995 movie “Clueless,” one character scornfully dismisses another by saying, “Why should I listen to you anyway? You’re a virgin who can’t drive.”
In 1999’s “American Pie,” four high school friends pledge to lose their virginity by prom night.
The list goes on.
But while American pop culture is rife with examples of virgins being shunned as pariahs, Korea takes a different approach.
“I grew up thinking that Koreans never had sex or even knew about it because of the absence of kissing and more in the few Korean dramas I had seen,” said So Jin Kim, a Korean-American who is a recent graduate of the University of Pennsylvania in Philadelphia.
Despite living in the United States, Kim’s parents still uphold Korean values with regard to chastity and pre-marital sex. “Sex is not usually something that’s openly discussed,” she said.
Although they don’t often explicitly say so, Korean parents expect their offspring to keep their virginity until marriage, an idea that stems in part from Confucian beliefs that are deeply ingrained in Korean culture.
According to a 1996 study by Youn Gahyun, a researcher at Chonnam National University in Gwangju, Confucianism places a high value on sexual innocence until marriage.
Additionally, as Christianity has eclipsed Confucianism in Korea, especially evangelical versions, the idea of chastity before marriage has become more pervasive.
Instead of talking about sex, Korean parents prefer to rely on tacit disapproval of sex instead.
“I remember my mom coming to me when I was about 14 or 15 and alluding to sex and asking if I knew anything about it,” said Kim, 22. “I said, in a very exasperated voice, “Umma [the Korean word for mother], I took FLE [Family Life Education] in fifth grade. Her reaction was something along the lines of: ‘Thank God I don’t have to explain it.’”
Despite their parents’ conservative outlook, some young adults do consider pre-marital sex to be normal behavior, and some partake, albeit furtively.
“I live with my grandmother so I have never taken a girl home,” said Chae Dong-yoon, 23. “I have gone to DVD rooms as well as ‘love motels.’ Mostly love motels though, that’s the most convenient place. I think this goes for the majority of Koreans who live with their parents.”
Yet among both Koreans and Korean-Americans, many young adults still cling to the idea of no sex before marriage.
Cha Eun-seok, a researcher in the department of nursing at Chung-Ang University in Seoul, has conducted a series of studies on safe sex among college students.
In 2006 she distributed questionnaires about sexual experiences to students at an undisclosed university in Seoul. Of the 550 forms she passed out, 320 were returned. “I found that 49.1 percent of males and 12 percent of females said that they were sexually experienced,” she said. “Even though the survey was anonymous, I think many of the students didn’t want to say they’d had sex.”
The students did answer follow-up surveys to determine the veracity of their answers, and 95 percent said they’d answered truthfully.
While the survey results represent only a sampling of the population at one Seoul university, they suggest that a majority of college students remain sexually abstinent.
Koreans who oppose premarital sex express their views in different ways.
On the Internet Web portal Daum, users have set up several online communities, in which they discuss and proclaim their virginity. At one such community, called “Virginity Pledge,” (http://cafe.daum.net/virginitypledge), 288 members participate in discussions about virginity. Featured prominently on the site’s Web page is a triangle labeled “LOVE,” which encompasses a circle labeled “Marriage,” which surrounds a heart labeled “SEX.” The diagram suggests that sex should only occur within the bounds of marriage, which should only be undertaken when two people are in love.

Top to bottom: So Jin Kim,Joanne Kim, Ian Beck,Linda An.

Although high security at this particular site prevents regular Daum users from reading the discussion threads, the topics are visible. They include headlines like “Sex leads to sexual harassment and assault,” and “I want to keep my virginity until marriage.”
At “Presex” a site with 781 members, (http://cafe.daum.net/presex) soft pink roses decorate the home page.
When users click on discussion topics, which range from “Don’t lose faith,” to “How to check what true love is,” anime characters spewing hearts and holding bouquets appear alongside messages.
In one discordant post, a user named “Crying” writes, “If you lose your virginity before marriage, you’ll go to hell.”
Christianity is a large aspect of the movement against premarital sex.
“I believe that virginity should not be surrendered until after marriage, which is what the Bible tells us,” said Linda An, a 22-year-old Korean-American.
Although the Bible never directly says, “Do not have sex before marriage,” several passages suggest this idea by using terms like “purity” and “sexual immorality.” On American religious Web sites that discourage premarital sex, such as http://christianteens.about.com, frequently cited passages include 1 Thessalonians 4:3-4 ― “It is God’s will that you should be sanctified: that you should avoid sexual immorality; that each of you should learn to control his own body in a way that is holy and honorable.”
“Most Korean-Americans I know grew up going to church,” Kim said. “So the first thing they heard about sex is that sex before marriage is evil, and sex after marriage is just not discussed.”
Lisa Hanmi Pak, an associate pastor in the English ministry at Onnuri Community church in Seoul says that young members of her congregation usually allude to sex by indirect means.
“I don’t think they [parishioners] feel comfortable admitting such things to a pastor,” she said. “The fact that people feel particularly uncomfortable with sexual sin shows us that this stuff cuts deep into our psyche.”
Christian groups often advocate public declarations of “sexual purity,” by symbolic gestures like wearing a “purity ring” on the right hand, which signifies that the wearer has decided to abstain from sex until his or her wedding night.
Alternatively some choose to announce their chastity pledge by signing certificates or cards.
“I think that the ring just attracts the wrong kind of attention,” said Pak. “It can put people who do not wear such things into an awkward position. I say the best way to show that you want to remain sexually pure is simply to remain sexually pure.”
However, some young Christians are ready for an alternative view.
“Most of my Christian friends know that staying a virgin is the right thing to do, but that’s not always the case,” said An. “Other friends think it is normal to have sex.”
“I feel that many are having sex or considering it, even those that consider themselves Christians,” Kim said.
“Most of my friends aren’t virgins,” said Ian Beck, a 22-year-old Korean adoptee who lives in the U.S. He said his friends and what he called the “pro-sex media” are influences that run contrary to his own beliefs, but he plans to remain a virgin until he gets married.
But for Joanne Yujung Kim, a 22-year-old Korean-American student at the University of Virginia in Charlottesville, Virginia, her friends have a different story. “My friends who’ve lost their virginity always encourage others to maintain theirs,” she said.
Jin Kim, Joanne Kim and An all cited their parents and Christian upbringing as the motivating factors behind their decision to refrain from premarital sex.
Even less fervent Christians like Beck maintain their desire to avoid sex before marriage. “I don’t go to church often, but I still don’t want to have sex until marriage because of religion and my own personal morals, respect for myself and respect for others,” he said.
While he is currently single, Beck said that he has had serious relationships in which he and his girlfriend consciously abstained from sex.
“We both made it distinctly clear from the beginning we didn’t want that from the relationship,” he said.
None of the young adults quoted in this article, however, pointed to the risk of sexually transmitted disease or unplanned pregnancy as reasons for abstaining from sex.
According to Cha’s study, sexually experienced Asian adolescents often fail to visit clinics to be tested for HIV/AIDS or even for simple gynecological exams.
Beck, who spent the past summer in Seoul on a study-abroad program at Yonsei University, was surprised to see so much sex in the Korean media. “I wouldn’t necessarily say that sex is being sold or promoted, but [advertisers] are using sexy people to sell things.
“There are 17 Tea commercials, where the actress Jun Ji-hyun is portrayed in various poses and outfits that I wouldn’t think are traditionally acceptable in Korea, or Giordano commercials, with actors and actresses scantily clad, ‘grinding’ against each other to sell clothes.”
Joanne Kim is aware of sex in the media and among people her age, but that’s not going to change her decision. “Sex is supposed to be very intimate and special,” she said. “I think it’s really easy to just give in to sex, but it’s a lot more difficult to stand up for the values you have.”
An plans to stand her ground. “Virginity is something precious to a woman. It is not something to be ashamed of, but to be proud of.” Her parents must be very relieved

*Lee Ho-jeong and Lee Eun-joo contributed to this report.