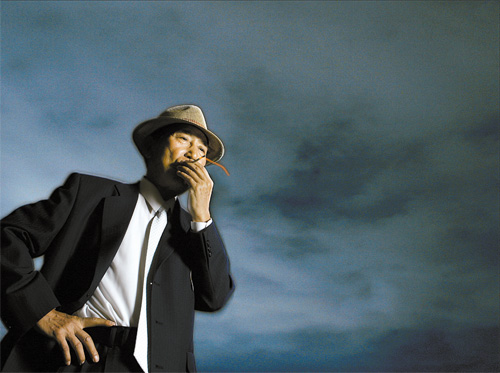 Being a weatherman was a lonely job for Kim Dong-wan. Now 73 and retired, Kim still has a good weather eye. He read the skies for almost 40 years, rain or shine, and he remembers the tension he enjoyed standing before the TV cameras as a star weatherman.
A weatherman to his bones, Kim says that he is now so old his face is “covered in troughs and isobars” referring to the wrinkles that have gathered around his eyes and lips.
Those wrinkles got deeper because of the lonely nature of his job, he said.
“When the weather forecast is right, it is taken for granted,” he said. “When it’s wrong, forecasters are ostracized like some kind of a public enemy.”
That does not mean that he holds any grudges. “That is just the fate of a weather forecaster, and that happened to be my calling,” he said.
Kim began doing radio and TV broadcasts in the 1960s as a member of the first generation of weather forecasters from the Korea Meteorological Administration.
With clever catchphrases like, “Today will be so hot that the flies will doze off in mid-air” and “General Winter will rule the nation today, so be ready and greet him in a warm outfit,” he became a star.
The TV networks fought over Kim because they believed that viewers tuned in to their channels because of the witty weatherman.
“Mr. Kim’s forecast was more than a simple piece of information but a kind of entertainment,” recalled Kim Myung-hwa, 60, who runs a coffeehouse in southern Seoul and remains a big fan of Kim Dong-wan to this day.

Kim’s decades-long career taught him not to complain about the weather, no matter how fickle it could be.
“There’s no use quarreling with providence, although it’s human nature to try and predict it,” Kim said.
However, such words fail to comfort Kim Myung-nam, who runs a motel in a tourist town near Mount Jiri. The meteorological office forecast 15 days of torrential rain this summer, but actually there were only five days of rain, leading to a sizable loss in business due to a drop in the number of tourists.
“I still feel angry about that forecast,” thundered the motel owner. The provincial office made an official complaint to the meteorological office.
The veteran weatherman feels sorry for the motel owner, but endeavors to defend his junior colleagues.
“Despite the advance in equipment, weather forecasting has become more difficult due to factors like global warming,” Kim claimed. He feels that this September was a good example of weather oddities. The meteorological office also noted that Korea had two late-season typhoons that produced storms, flood damage and death in places like Jeju Island.
It was also the month that saw the highest precipitation and the least sunshine for September since 1973.
“We have an accuracy rate of around 85 percent,” Kim said. “That’s quite a high ratio for a human being trying gauge the will of heaven.”
Like any weatherman, Kim has endured his share of complaints and curses when his forecasts have been wrong.
“I always carried a collapsible umbrella, so that I can hide it in my pocket, just in case my forecast for rain turns out to be wrong,” Kim said.
His worst experience took place on one Children’s Day. Based on information from the meteorological office he had forecast a holiday day full of sunshine without a cloud in sight
“In my broadcast I said the day would be sunny and bright like a child’s smile,” he says. However, the moment he stepped out of the station, he found himself in a downpour.
He found himself stuck in the lobby, watching passers by without umbrellas running to avoid rain.
“I was too embarrassed to go back to my office or to go out and encounter people who would recognize and blame me,” Kim recalls.
Instead he found a small nook in a recessed, dark area of the lobby and hid there for hours, waiting for the weather to clear up.
He then went to a public bathhouse, only to find strangers protesting about the weather. When he got home, his wife began teasing him. “Honey, didn’t you tell us it would be a bright, sunny day?” she said.
Kim ended up quarreling with his wife that night.
“I felt more gloomy than ever that night,” he says, although he can now laugh about it and feels sorry for taking out his emotions on his wife.
Being a celebrity weatherman made Kim a target. He would even get calls from people complaining about forecasts that had been made by his rivals. He found the best way to deal with complaints was to listen politely, although there were times when he hung up on the caller.
“Some callers were under the influence of alcohol and just wanted somebody to curse,” Kim said. “In that case, despite a clear connection, I would sometimes pretend that the line was bad.”
Kim quotes a Korean proverb that says the more curses a person faces, the longer he or she will live. “At least, I will have a long life,” he said, with a smile. 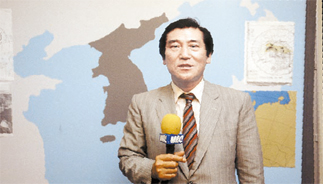 His popularity was earned by hard work and integrity. After he graduated from college, he worked every day from 4:30 a.m. to midnight, with few days off. As the holiday seasons in summer and winter were busy times for weathermen, Kim has never gone on a vacation with his family that lasted more than a couple of days.
One year, he made an ambitious plan to go to Mount Seorak for a summer vacation, only to discover when they arrived that a typhoon was approaching.
Speaking of typhoons, Kim has a lot to say on the subject. “As a weatherman, I felt like a great sinner whenever there were typhoons,” Kim said. Korean TV networks used to have continuous weather specials during typhoon season and Kim could not even dream of going home.
Such dedication was much appreciated. The competition among the networks was fierce and he was dedicated to his job at the Tongyang Broadcasting Company, or TBC, which was later annexed to KBC-TV by the Chun Doo Hwan regime.
“One night, a friend from KBS-TV was waiting at the door of TBC, and asked me to join him for a drink,” Kim said. “But I found myself sitting in the office of the KBS-TV president, who presented me with a blank check.”
However, Kim refused the offer because of his status as a government official and his dedication to TBC.
The following day Kim was thanked by Lee Byung-chull, the founder of both TBC and Samsung, for his loyalty.
Kim eventually left the meteorological office in the early 1980s to join TBC full-time and later he went to MBC. He became a freelancer in the 1990s and appeared in a series of popular commercials for weather-related items, such as cold remedies and air conditioners.
The wry comments which helped make Kim so popular were accumulated through years of research. When he was at meteorological college, he made a living driving a taxi, and found that his passengers were bored by weather forecasts that were presented in the format of straight news. So he looked for ways to make forecasts both informative and entertaining.
“The point was to make use of fun sayings while giving detailed information about what to wear,” Kim recalled.
Such sayings included “When there is rain and sunshine, that’s a day when a fox is getting married.” Others were born from his creative imagination.
“Kim Dong-wan elevated the status of the weather forecast,” said Kim Seung-bai, one of his junior forecasters at the meteorological office. “He found ways to make his humor fit the information.”
Kim says he found his life’s work by sheer luck after seeing an announcement about the opening of a school in Seoul while on a train ride to the capital from his hometown of Gimcheon, North Gyeongsang.
“I was just trying to test the waters to see if I could pass the teacher’s exam,” Kim said. However, when he passed, he chose the meteorological college, as it was a way to become a government official, which he thought would please his parents who were humble country people.
Kim realized that the weather was his life’s only work when he tried his luck at politics but failed to win a seat in the National Assembly after he stood in 2000 under the banner of the now-defunct United Liberal Democrats.
“The party leaders asked me to run because of my popularity with the public, but it still escapes me why I made such a hasty and unwise decision,” Kim said.
He ended up losing most of his assets during the election campaign and his wife missed the chance to go to hospital for diabetes because she was supporting his election efforts. As a result of complications she lost her eyesight.
Kim’s most important daily tasks now are taking good care of his bedridden wife.
“I paid a big price to learn some important life lessons” Kim said.
Still, Kim believes his life will get better, just as warm spring rain follows a cold, barren winter. “Living like a spring rain” is one of his favorite good luck phrases for newlyweds ― he has officiated at over 1,000 weddings so far.
Asked about his favorite weather he said, “I like a day that’s not too bright and not too cloudy with a thin layer of cloud over the sky. There is still some hope for those who want rain, whereas those who want a sunny day will be modestly satisfied as well. That’s the kind of weather that makes everyone happy.”