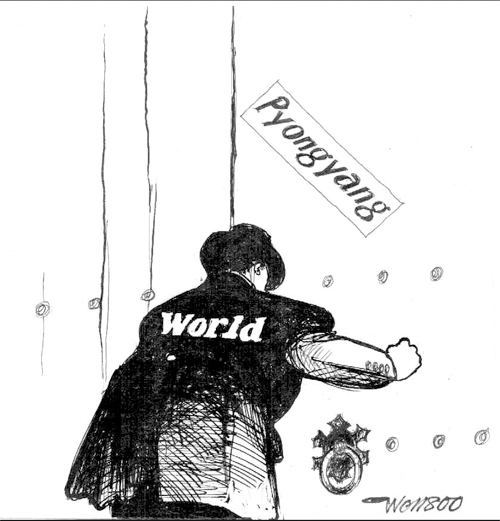 “May the people’s happiness come from the sanctuary of the people’s sovereignty,” President Roh wrote in a guest book upon visiting Pyongyang’s parliament.
The term people, inmin in Korean, instantly stands out. It feels rather awkward that a president of the Republic of Korea, whose institutional foundation lies in liberal democracy, uses the term.
The word inmin has a sociopolitical meaning. It originated from the Latin word populus and then settled as people in English. The translation of people in Asia is inmin, which has been favored mostly by socialist countries since the Russian Revolution of 1917 as a word to refer to citizens in the countries which uphold communism and socialism.
In Asia, here meaning countries influenced by Chinese characters, the letter in, which means a human, and the letter min, which means subjects of a nation, are rendered synonymous.
The term min corresponds to the term maeng, meaning laymen. Overall, min has a somber connotation, because whereas the conception of the character in refers to a person regardless of one’s position in a hierarchy or birthright, min is usually used with contempt to indicate an ignorant person or a dimwit.
Therefore, although the words in and min are rendered synonymous these days, it is simply not right to replace with the word min the terms that use in whose meanings demand respect for humanity, i.e. seong-in meaning a saint and gui-in meaning a noble man.
The term inmin has established its place and now looks familiar to us, but once we examine the etymology of the word, it can be soon found that the combination of the two words seems rather a mismatch.
Moreover the term inmin, or people in English, has appeared in the names of socialist countries such as the Democratic People’s Republic of Korea, People’s Republic of China and People’s Democratic Republic of Laos, establishing the word to be a sole appropriation of socialist regimes.
That the president of the Republic of Korea, which holds a wholly different set of political principles, publicly using the term inmin in North Korea is highly inappropriate, no matter how hard one tries to understand. Who would not hope the inter-Korean summit which finally took place after a long interval should have considerable achievements? However, I am in the meantime concerned with the steps taken by the president for they occasionally blur the identity of modern Korean society.