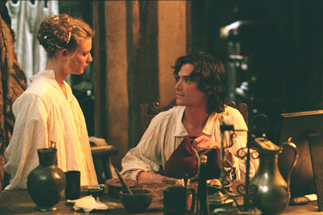 Billy Crudup’s appearance, right, is one of the only redeeming features of the costume drama “Stage Beauty,” in which he stars opposite Claire Danes. Provided by Lion’s Gate Films

See if the following sounds familiar: The scene sets on 17th century London, where laws bar women from taking the stage. Effeminate men take the roles of women in plays in all their cross-dressed, heavily made-up glory. Ladies of the time don frothy dresses and intricately curly hairdos, while gentlemen stomp around in waistcoats and breeches. Among all this, one young woman dreams of becoming an actress. She succeeds through her own wily cunning and falls in love along the way.
If “Shakespeare in Love” (1998) is the first film that pops into your head, you’re not alone.
This is exactly why playwright Jeffrey Hatcher never should have adapted his play “Compleat Female Stage Beauty” to become the film “Stage Beauty,” essentially a watered-down copycat of its Best Picture-winning counterpart.
And while it seems like I’ve given away the entire story in the first paragraph of this review, don’t worry, you would have known all that anyway by watching the trailer. But for those who want details, Claire Danes plays Maria, the stage-struck dresser who yearns to cast off her backstage role to take the stage.
In the first of heavy-handed ironic twists in Stage Beauty, Maria dresses and practices lines with none other than Ned Kynaston (Billy Crudup), who plays Shakespeare’s leading ladies best among all Londoners. As long as Ned holds his ground in the spotlight, he powerfully maneuvers the theater scene as the star of his company and the darling of fans.
In her off-hours, Maria manages to moonlight once as an actress in a tavern, stealing Ned’s costumes, wigs, props and completely affected female mannerisms ― technically within her legal limits since she doesn’t act on a “public” stage. Ever so predictably, Maria is a hit, thus unintentionally staging a coup for all would-be actresses in London. Her theatrical success creates a rift between her and her secretly beloved Ned, who doesn’t like her anyway, as he’s busy in a gay love affair ― at least for the time being.
In fact, sexuality becomes one of the most ridiculously exploited aspects in Stage Beauty. With all the sexual tensions that bubble under the surface of the film, Hatcher and director Richard Eyre seek to cleverly provide an outlet through failed tongue-in-cheek naughty humor. Sexual orientations magically change at the drop of a hat, couples play dirty dress-up and heaving bosoms abound.
Case in point is the foppish King Charles II (Rupert Everett), wrapped around the finger of his actress mistress, Nell Gwynn (Zoe Tapper). After a downright icky oral sex scene between the two, complete with about eight King Charles spaniels, the king opens the stage to women and proclaims men shall no longer play female roles. This sends Ned into a downward spiral as he loses not only his job, but also his niche in society.
In another off-putting, incongruous scene, Maria, curious as to “what men do with each other,” models different sex positions with Ned, asking, “So am I the man now? Am I the woman now?” with each change. The tutorial ends up becoming an ill-fated love scene that is more repulsive than romantic.
For those readers completely lost as to how Maria ends up in bed with the gay, ostracized Ned, who by this point loathes her, don’t expect the actual film to clarify any of the character development. The plot moves in such awkward clunks, even resorting to juvenile “...Six weeks later” subtitles. This affords characters the liberty to go from introduction to engagement, and from gay to straight, in a matter of minutes.
Perhaps worst of all is Danes as Maria. With an emotional roller coaster of a plot, she is on the verge of tears in at least five scenes. With such rampant waterworks, Maria becomes the object of eye-rolls, not sympathy. It’s too bad, too, that among the Shakespearean heroines Maria portrays, she never plays Katherine from “The Taming of the Shrew.” Now that would be an apt role for Danes, as she screeches and raves incessantly toward the latter half of the film.
Stage Beauty manages to find slight redemption as eye candy: sweeping London cinematography, divine costuming and the smokin’ hot Billy Crudup ― even if he is in drag.