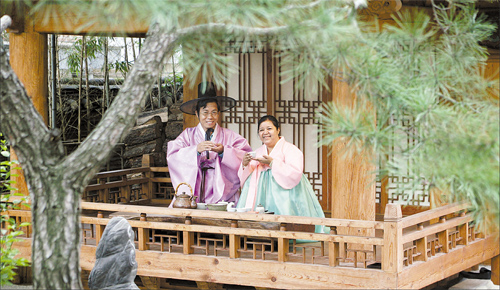 Phoukhong Chanthachack, left, from Laos and Khin Sander from Burma, took a tea class in RaKoJae during a workshop in Seoul on Wednesday. Photo by Jeong Chi-ho

If styles of residential architecture can offer seasonal metaphors then resort hotels are summer and a Korean hanok is autumn.
During the summer we all dream of dipping our feet into a swimming pool at a posh resort hotel while sipping martinis but as autumn arrives, we seek something more sentimental, subtle and earthy, and traditional Korean houses are all about such rustic charms. After all, they are designed to co-exist peacefully with nature.
We have compiled a list of hanok guesthouses and hotels around Korea. Before autumn fades into winter, let your soul float with the falling leaves as you listen to the sound of the breeze passing over the eaves of a hanok roof.

●Jeonju Hanok Village
After the Eulsa Treaty was signed in 1905, one of the ways in which the people of Jeonju resisted the Japanese authorities was to build traditional Korean homes. Thus the houses in Jeonju Hanok Village were a statement of national pride and remain so today.
Today, there are about 700 houses in the village, most are equipped with modern amenities, including air conditioning, heated floors, refrigerator, flat screen television and free wireless Internet service.
There are three hanok hotels in Jeonju Hanok Village. Yang Sa Jae (063) 282-4959, which is over 200 years old, is an upscale guesthouse. It used to be a Confucian school and has a traditional green tea garden in the backyard. Room rates range from 25,000 won ($28) for one person to 65,000 won for four, including breakfast and tea.
Saehwa gwan, (063) 287-6300 ― the Chinese character for the hanok’s name represents a scholar resting under a pine tree ― is a house in the Hanok Living Experience Center and consists of a main building and a separate suite.
Its first class rooms are called sunbibang (“a scholar’s room”) or kyusoobang (“a maiden’s room”), and are priced at 120,000 won and 100,000 won respectively. All fees include free breakfast, bicycle rental and free admission to traditional performances on Saturdays.
Seunggwangje, (063) 284-2323, is run by a descendant of Joseon Dynasty royalty and is available at 80,000 won for two.
The village has programs for visitors including a traditional music concert, a liquor-tasting session at a beverage museum and a hanji-making class using traditional mulberry paper. At Woo Suk University’s Traditional Medicine Center visitors can get a quick assessment of their metabolic “constitution” according to traditional oriental medicine. From Monday until Wednesday there will be free pansori concerts in the village as part of Jeonju Sori Festival. http://hanok.jeonju.go.kr/ 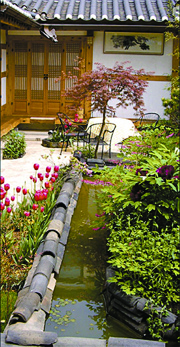 The Tea Guesthouse in Seoul’s Bukchon.

●RaKoJae
RaKoJae, (011) 286-1855, which means “a place to rest one’s soul,” is an upscale modern guesthouse in Seoul with the landscape of an ancient scholar’s house, luxurious decor, a courtyard with a pond, traditional chimney and bamboo trees in the garden. In the master bedroom the floor is made of jade.
Visitors can also have access to a natural mud sauna, a laundry service and tea drinking sessions. RaKoJae is in Bukchon, a traditional neighborhood that lends itself to atmospheric strolls in the evening. Room rates range from 180,000 won to 450,000 won including a choice of complimentary Korean or American breakfast. http://www.rkj.co.kr

●La Gung
The opening of La Gung, (054) 778-2500, last May was the talk of the town among Gyeongju’s Bomun Lake taxi drivers. In a city full of temples that date back thousands of years, the idea of a sleek hanok with a modern spa in the style of a posh resort hotel was a stunning development. Nearly 107 carpenters and sixteen stonemasons were employed during the hanok’s reconstruction. The result is probably the most luxurious hanok imaginable ― sixteen houses with outdoor spas in their own private gardens, high ceilings and designer lighting made from traditional mulberry paper. La Gung is based on a European-style luxury hotel and it’s pricey. There are deluxe rooms at 300,000 won for two including a Korean-style breakfast, dinner and free admission to a period musical. The suites are 400,000 won for two. 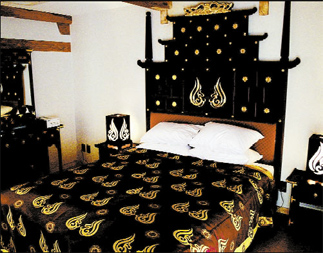 ●Ssangsanje
Ssangsanje, (010-9644-7116), in Gurye County, South Jeolla, is a 300 year-old house. It was reopened as a guesthouse three years ago by a descendent of the original owner. The spacious complex is made up of five houses, including the main house with two rooms, a bathroom and a kitchen. Room rates range from 100,000 won to 300,000 won. In autumn visitors are encouraged to pick persimmons or dig sweet potatoes to roast in their fireplaces. The pastoral landscape of the village helps to build the atmospheric mood of the place.
www.ssangsanje.com

●Jirye Artists Colony
The Jirye Artists Colony (054) 822-2590 established its name on the literary scene when celebrity writers like Lee Mun-yeol and Gu Sang stayed in the town to work on their books.
It‘s easy to see how people focus on their writing here. Mobile phones don’t work and there is no tangible sense of time, with no TV or clocks. Most visitors spend their time fishing or picking fruit in the forest. The village is a 45-minute drive east of Andong in North Gyeongsang and offers an ideal setting for people to relax, as it is nestled between a pristine forest and a lake. Room rates range from 40,000 won to 100,000 won.
http://www.jirye.com

A hanok hotel in Songo Gotaek in Cheongsong. [JoongAng Ilbo]

●Songso Gotaek
The Old Villa of Songso,(054) 873-0234, is owned by Cheongsong Sim, the clan that once ruled Deokcheon-ri in Cheongsong County, North Gyeongsang. The house, which was designated as a cultural asset, belonged to Sim Hotaek.
The house is a luxurious hanok with 99 rooms ― only kings were allowed to have 100. Rooms are heated by ondol flooring. The village has a tranquil air in the early morning with persimmon trees in the garden of almost every house. Rates range from 40,000 won to 180,000 won. www.songso.co.kr

●Suaedang
There are several hanok guesthouses in Andong, the former Confucian capital. Suaedang (054) 822-6661 is the former residence of Yu Jin-geol, a renowned politician from the North, and its architecture is typical of the late Joseon Dynasty. The house is known for the stylish patterns on its doors and small details like pillow covers dyed with natural pigments made from persimmons.
There are 11 rooms decorated with natural paint and all have modern kitchens and bathrooms. Room rates range from 40,000 won to 90,000 won.

●Nongam Jongtaek
On the main door of Nongam Jongtaek, there is a Chinese character created by King Seonjo that says “jeokseon,” which means “live giving generously.” Nong-am Jongtaek in Andong, (054) 843-1202, once belonged to literary scholar Lee Hyeon-bo, or Nong-am (1467-1555) who is remembered for having turned his back on power to live in the countryside.
Nong-am’s hanok consists of four large rooms, each of which accommodates up to eight people, three smaller rooms and a farmhouse.
Lee Seong-won, a direct descendent of Nong-am, runs the property, which sits in a pine grove near a river. Room rates range from 40,000 won to 100,000 won.

●Seonbichon
Seonbichon, (054) 639-7144, in Yeongju, North Gyeongsang is known as a scholar’s village and has panoramic views of the Sobaek Mountains. The hanok homes here were lived in by scholars and literary figures from the Joseon Dynasty including Kim Se-gi and Kim Gyu-jin. The village offers a scholar’s program, in which visitors can stay overnight and experience the lifestyle of Korean scholars by practicing calligraphy, tea drinking and Confucian etiquette. Room rates range from 20,000 won to 50,000 won.

●Anyongdang
There are around 75 hanok guesthouses in Kurim Village, Youngam, South Jeolla, which was a major port serving China and Japan during the Unified Silla Kingdom 2,200 years ago. Anyongdang, (061) 472-0070, built during the second year of King Sukjong’s reign, means “everything will be accomplished smoothly” and it is one of the most popular guesthouses in the province. It has modern kitchen and bathrooms and cozy courtyards. Room rates range from 30,000 won for two.

●Gusamjae
If you are looking for a weekend getaway from Seoul, Gusamjae, (031) 948-6669, is an ideal option. Located in Heyri Art Valley, Paju, Gyeonggi, in a town with museums and bookshops designed by high-profile architects, this deluxe guesthouse is attached to the 93 Museum, which specializes in modern art. To rent the whole house costs 300,000 won (350,000 won on weekends) and it comes with a modern kitchen, dining room and bathroom. Cooking is not allowed as a safety precaution. The guests get a 50 percent discount at the museum, which currently houses an exhibition of contemporary Vietnamese art.

●Tea Guesthouse
Located near Changdeok Palace in Seoul, the Tea Guesthouse, (02) 3675-9877, is one of the new guesthouses in Bukchon and is designed for backpackers and tourists. Nestled in Gye-dong, a special annex of the house offers an entire hanok for 130,000 won per night with a private garden, a dining room and bathroom. Fees include a Western breakfast, wireless Internet and a guidebook. Korean-style breakfasts cost extra.