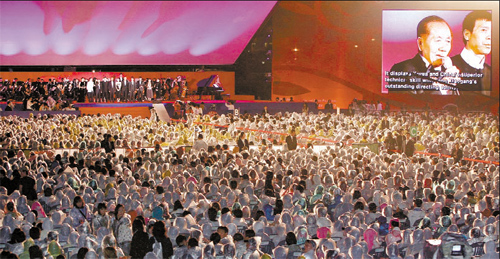 The 12th Pusan International Film Festival kicks off yesterday with 2,000 filmmakers, actors and fans filling the Suyeongman Yacht Center near Haeundae beach in Busan for the opening. [YONHAP]

BUSAN ― The arrival of cool air in this port city in October does not just signal the change of season. It also means that it is time for the Pusan International Film Festival, which began its nine-day voyage on a sea of films yesterday.
Some 2,000 filmmakers, actors and moviegoers filled the Suyeongman Yacht Center near Haeundae beach for the opening. The lineup on the red carpet included stars from both home and abroad, from world-acclaimed film music composer Ennio Morricone to celebrated Korean filmmakers Im Kwon-taek and Lee Chang-dong.
Actress Moon So-ri and director Jang Joon-hwan, a married couple, hosted the ceremony, which was followed by the screening of the opening film, “Assembly,” by the Chinese director Feng Xiaogang. Korean harmonica player Jeon Jae-deok played Morricone’s well-known tunes during the opening ceremony, paying homage to the composer. Some 140 journalists from 17 countries are covering the festival.
The opening film is based on the 1948 civil war in China and tells the story of a soldier who is tormented by his actions.
The festival is the most successful of its kind in Korea and arguably in Asia. This year, 275 films from 64 countries will be screened. That 66 of the films are premiering at the event, the most in the festival’s history, is a sign of its growing status. The festival is scheduled to end next Friday.