Keep it simple: To Armani, less is more when designing

Keep it simple: To Armani, less is more when designing 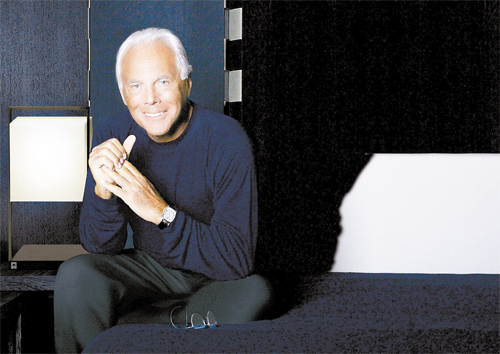 At 73, Giorgio Armani finds inspiration for his work in young people.

“Fashion whispers simplicity,” said Giorgio Armani, 73, the world-famous Italian fashion designer.
With his simple designs that never go out of fashion, Armani now has 400 stores worldwide that made 5 billion euros ($7 million) last year.
The company makes clothing and accessories, home interiors and cosmetics, creating “a beauty empire,” according to Armani.
“Next month, I’m planning to showcase an Armani-Samsung cell phone as well as a Hotel Armani,” he said. Recently, Armani was asked to design yachts, which he is considering.
Armani gave an exclusive interview to the JoongAng Ilbo in September in Milan commerorating the 42nd anniversary of the newspaper.
To Armani, “a designer should create more beauty tomorrow than today.” He also says that a designer should build a life that is splendid and exciting. Reflecting his philosophy, Armani has worked to add beauty to objects that people think are unappealing.
“In fact, beauty is present in many objects around you but you don’t realize it,” Armani said. For example, “There is beauty in the furniture itself and in the designed ornaments.”
Though expressing beauty is what every designer pursues, Armani seeks simple beauty. 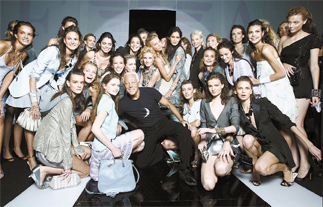 “Design is the process of converting complexity into simplicity,” he said. “Design means throwing away what you don’t need.” To Armani, a simple life provides more comfort and advances life.
“Defining simplicity in design is rather difficult,” Armani said. “But simple is what I am ― it’s my life and work philosophy.” To this day, Armani works to bring out the simple beauty residing in elegance.
But simplicity of design does not mean monotony. Rather, it is the basis of naturalness and dignity. Armani’s work has been described as classic luxury. He noted how “less is more” in design.
But the celebrated designer is sometimes criticized by fashion industry experts.
“The experts criticize me when my work turns out to be what they hadn’t expected,” Armani said. But he said that receiving criticism isn’t fatal. “I don’t want to please professional critics but the customers. Customers are my only important critics.”
Perhaps Armani could have said patients instead of customers ― he was once a medical science student. But he wasn’t able to continue his studies due to lack of money. “Plus, studying wasn’t all that easy,” he said. And then he had to serve in the army, which forced him to stay out of school. After the army, he didn’t return to school but began work at La Rinascente department store in Milan. He worked as a buyer and a window dresser. “That was the beginning of my long-time career,” he said.
While starting his own business, Armani faced a crisis when his business partner and companion, Sergio Galeotti, died in 1985 of a heart attack. (Galeotti had persuaded Armani, then a freelance designer, to open his own company in 1974.)
“I had never managed a company before,” Armani said.

An Armani model at the Autumn-Winter collection in February. [JoongAng Ilbo]

But when my friend died, I had to take care of all he had overseen.”
Though it was tough, Armani followed his instincts and applied his own fashion philosophy.
“I concentrated on the details and worked in depth,” he said.
The process led Armani to realize that he could manage a company. “The fact that I could do it was most inspiring,” he said.
With this can-do spirit, Armani developed his work boundaries.
“Things that are excellent become plain and dull after a few years,” he said.
His best friend calls Armani a geniaccio, an Italian word referring to a person who only concentrates on what he wants to do.
“I want to continuously develop the fashion industry,” he said.
Distinguishing himself from other fashion leaders, Armani noted how he always has new ideas to share.
“I not only incorporate ideas in my head but I outwardly express and design,” he said. “I believe I have a greater ability to design than others.”
Armani noted how small companies produced clothing in the 1980s but today, only the leading groups create style.
“Large fashion corporations create anything they want, even if there is no creativity in the work,” Armani said. “The world has become very different.”
He also criticized how today’s fashion magazines inappropriately use youth ― “They [magazines] are limited to expressing youth as merely glamorous and pretty.” 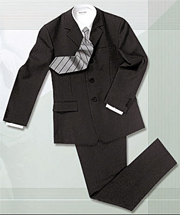 Armani disagrees. “There’s more to youth,” he said. “Young people have something that cannot be expressed in words deep in their hearts.” Armani tries to express that something through his work.
“You shouldn’t scold young people. You should listen to them and hear what they’re trying to say,” he said. That understanding spirit is what helps Armani create new fashion for youngsters. “Young people are the inspiration for my work,” he said. “I respect them.”
Though in his 70s, Armani still looks young. He works out every day and gets to sleep before midnight, except when he has parties to attend. “I am most excited in the morning when I organize that day’s schedule,” Armani said.

Giorgio Armani was born in Piacenza, Emilia-Romagna in Northern Italy in 1934. From 1961 to 1971 he worked as a designer at a fashion company called Nino Cerruti. In 1974, with his partner, Sergio Galeotti, he established “Giorgio Armani S.p.A.,” a menswear label. They introduced a womens-wear line in 1975.
In 2005, the American magazine Forbes named Armani the world’s most successful Italian designer. He designs for Armani Exchange, Armani Jeans, Armani Casa (home collections), Armani Junior, Emporio Armani (youth wear), Armani Collezioni, Armani Prive and Armani Cosmetics.
The Economist, a weekly magazine on international affairs, described Armani as a pioneer of luxury brands. His reputation in the world fashion industry enabled him to become one of the few designers with his own brand name for 30 consecutive years.
In January 2007, Armani was the first designer to broadcast a fashion show live on the Internet.