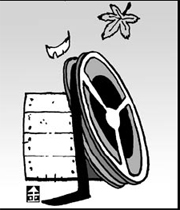 “If people talk about Ingmar Bergman of Sweden, I always mention the film ‘Late Autumn’ by director Lee Man-hee,” said culture critic Lee Uh-ryung. The film, starring Shin Sung-il and Moon Jung-sook in 1966, represents the work of the genius director, who died young. It is also a masterpiece with a place in Korean film history. It heralded the beginning of Korean modernist movies.
However no copies of Late Autumn exist in South Korea, so we cannot see the movie now. It exists only in the memories of those who have seen it and in the photos and written documents about it.
Not only Late Autumn, but many legendary films from Korea’s early film history, such as “Arirang” by director Na Woon-gyu in 1926, and “A Boat that Lost the Boatman” are missing.
The oldest existing Korean motion picture is “Mimong” from the year 1936 and directed by Yang Ju-nam. Moon Ye-bong starred in the film. It is one of seven films that appeared during the Japanese colonial rule that the Korea Film Archive found in the Chinese Film Archive in 2004 and 2005. According to the 2006 report of the Korea Film Archive, 485 films that we do not have copies of are left overseas.
At the Culture and Arts section of the inter-Korean summit, South Korean representatives suggested exchanging missing films like Late Autumn. Unlike Arirang, of which it is believed that no copies exist, copies of Late Autumn are believed to exist in North Korea. That assumption sounds convincing, particularly considering the account of late director Shin Sang-ok who had a chance to glance at the extensive film library of North Korean leader Kim Jong-il when he was abducted by the North. Kim was proclaimed to be a film fanatic.
Last year the film “Yeol Nyo Mun,” or the “Gate of Chastity,” by director Shin Sang-ok, which was finally found in Taiwan and restored to a screenable state, was released on a special screen at the Pusan International Film Festival. The director’s wife, Choi Eun-hee, a famed actress herself, seemed to have had a lump in her throat when she said, “I thought I would never be able to see the film again for it was in North Korea. I feel as if I have found a lost child.”
To fill the gaps in film history by mutual cooperation between South and North Korea would be a new start to beginning a complete film history of Korea. This is timely indeed since this year seven modern films including “Mimong,” “Mrs. Freedom” and “The Wedding Day,” were registered for the first time as cultural heritage items by the Korean Cultural Heritage Foundation.