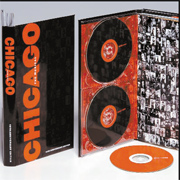 The musical “Chicago,” a revival of the 1975 original, marked the 10th anniversary of its reopening in 2006. The piece became the ninth-longest running musical on Broadway, and a deluxe album has been released with two versions of Chicago included. One is the soundtrack from the current production and the other is the 1975 original plus some extracts from international versions of the show.
Ann Reinking’s new interpretation of Roxie is notable. She seems to play a “crude” Roxie with less talent, singing in a raspy and husky voice. However, Bebe Neuwirth’s performance as Velma is excellent, especially in “All That Jazz.” James Naughton, plays Billy Flynn with panache, especially in “We Both Reached for the Gun” where he sings in the voice of a young woman and an ambitious lawyer. Overall, the recording itself has a few flaws. It is a must-own for Chicago addicts, who must have been hoping for a compilation like this for some time.
By Lee Hyo-jeong