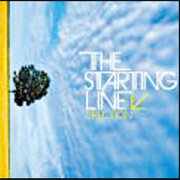 Little Kenny Vasoli, the frontman of The Starting Line, has grown up, and “Direction” shows which way he’s headed. No longer the blond 14-year-old he was when the band assembled in 1999, Vasoli has turned his sunny mop into a Dylan-esque dark ‘fro and nixed the sweet songs about missing his parents while on tour. Instead the disc blasts listeners’ ears with, “It’s 7 and I’m already wasted/I’m 21 and I’m already hasty/What am I gonna, what am I gonna do?”
Choosing the album’s first single must have been easy, as “Island” clearly stands out with its catchy guitar riffs and carefree lyrics: “Let’s sail away, find our own country/We’ll build a house and beds out of palm trees.” While only Island reaches the zenith of The Starting Line’s capabilities as previously revealed in their 2002 release, “Say It Like You Mean It,” listening to Direction on repeat is a good way to relive the joys of warm beaches, partying and sun-drenched convertible rides as the weather starts to turn cold.
By Hannah Bae