Emotional teen pop gets too big for its britches

Emotional teen pop gets too big for its britches 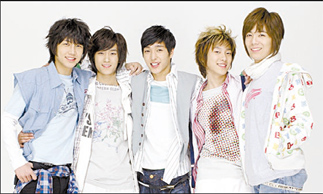 The melodramatic croons of groups like FT Island, above, sound like cattle calls to some. [JoongAng Ilbo]

Current Korean pop songs, mostly sung by teen idols, are quite seized with the theme of breaking up. Their lyrics bombard listeners with desperate words such as “tears” or “regret” when describing heartbreaking situations of parted lovers. The tunes are often sung in styles of quasi-R&B and soul, with sad melodies full of stretched-out notes and sobbing vibratos. This singing technique has come to be known as “somori (cattle-herding) singing” in Korean because the songs sound like the howls of farmers as they muster herds of cattle in the field.
The popularity of the somori voice doesn’t appear to be going anywhere but up for the time being. “Love Sick,” a song by pop group FT Island, currently tops the charts although the average age of the band’s members is only 17.5. Are these youngsters really mature enough to understand the sorrow of a breakup? A radio D.J. once said, “I doubt teen idols cry from the bottom of their hearts. They must sob like they’ve been trained.”
What makes these teens keep singing breakup songs? It appears record labels are to blame. Teen idols are the products of these companies, which consider profits their bottom line. Thus, the companies follow music fads and prevent new singers from experimenting with new genres. Moreover, record labels select new singers based on their appearances rather than musical talent. These trends sterilize talented musicians. New idols have no other choice but to perform ready-made songs composed by the older generation. Not surprisingly, Ryu Jae-hyeon, a 27-year-old songwriter, wrote FT Island’s “Love Sick.”
Music critics also find that shifting consumer groups affect record labels’ decisions. Teenagers are now the main consumers of pop music, and they look for songs that express their feelings. They find that overripe breakup pop best demonstrates their hormone-crazed feelings and would rather play songs of this genre than simply tell their significant others how they feel.
But why do labels insist on somori singing, which imitate R&B or soul? Critics explain that Korean pop songs use the success of J-pop as a benchmark. Teenagers’ somori singing has been lucrative on the Japanese music scene for years, and Korean labels apparently hope to mimic their success.
Koreans, however, may copy J-pop too closely. “Love Sick” stirred up controversy last July as it gained popularity. Turns out the song sounds suspiciously similar to a Japanese release.