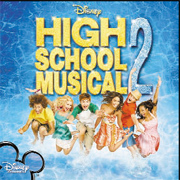 The American sitcom “Saved by the Bell” was a big hit in the late 80s to early 90s. So was “The Wonder Years,” which ran for five seasons on ABC. Now, it’s Disney’s “High School Musical 2,” a sequel to the original movie with the same name. The show has had more than 17 million viewers in America since its debut last August.
The debut album was the number one download on iTunes and Amazon.com and sold more than 2 million copies worldwide.
In the mid-tempo ballad “You Are the Music in Me,” Vanessa Hudgens, who plays Gabriella in the show, and Zac Efron, who plays Troy, sing, “It’s like I knew you before we met,” referring to how the two can’t live with each other.
As a contrast there to this soupy ballad there is more danceable “You Are the Music in Me.” “I Don’t Dance” is a groovy hip-hop with a low melody and a brilliant chorus.
The story-based OST is recommended for teenagers who like musical songs. Otherwise, the nagging-like voice can turn you down.
By Lee Eun-joo