Without gold of silver, what on earth is a girl to wear?

Without gold of silver, what on earth is a girl to wear? 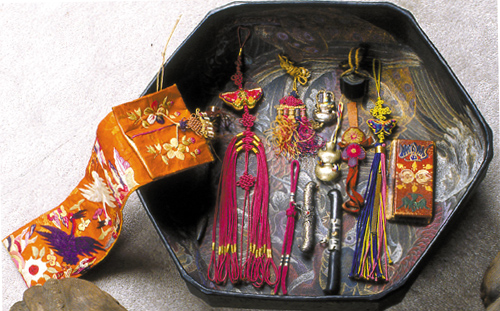 A collection of norigae and hair accessories from the Joeseon Dynasty and other periods.

In a recent interview about her work on “Hwangini,” a period drama with elaborate costumes, actress Song Hae-gyo said the biggest challenge in making the film was sustaining the weight of the elaborate headpiece she had to wear.
“My neck was stiff for six months,” she said. “The headpiece weighed three to four kilograms and it felt as though my head would fall backwards if I didn’t stay focused. I lost a lot of hair from the crown of my head.”
Despite Song’s suffering, headdresses and colorful accessories were once characteristic of Korean attire. The Chinese used to call the Joseon Kingdom(1392 to 1910) “a country of gowns and hats.”
“Besides norigae [women’s pendants], accessories related to the head were very important in Korea as hanbok is essentially a very plain and modest costume covering most of the body,” said Kim Myung-hee, chief of the Bona Museum, a private institution in Seoul dedicated to Korean accessories with over 10,000 artifacts from the Joseon Dynasty. “Therefore, headwear became an important way for women to express their sense of style and rank.” 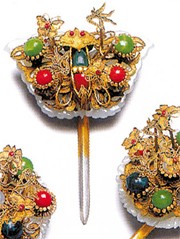 For men, gat, a Korean hat with a wide brim worn by the nobility during the Joseon Dynasty, was the main head gear, with variations signifying rank and occasion. For women, however, coifs (made like modern day hair extensions) adorned with different decorations were used as a symbol of their virtue, femininity, status and elegance, producing stylish metaphors to balance the simple silhouette of hanbok.
The trend in women’s clothes during this period resulted in the upper garment, the jacket, becoming smaller and shorter, while the skirt grew to be larger and more voluminous.
In accord with the fullness of the skirt, the coifs got larger and hair ornaments, as a result, got to be much more extravagant than the past, so much so that there was a royal ban against enlarged coiffures during King Youngjo and King Jeonjo’s reigns. In 1829, during King Sunjo’s reign, lighter chignons became popular and the exaggerated hairstyles disappeared, along with the voluminous skirts. 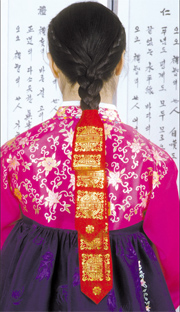 Like hairstyles and skirt dimensions, Korean accessories have always been influenced by traditional costume. During the Three Kingdoms Period (early 4th century to mid 7th century) and a few centuries afterwards, Korean accessories were greatly influenced by China. In fact, from the 7th to 9th century, traditional costume across Eastern Asia had a heavy Tang Dynasty emphasis. Day-to-day wear for men, including the king, was a black cap and white coat.
Later, during Mongolian rule (1259 to 1356), Korean accessories went through more changes. Under Mongolian influence jjokduri, a ceremonial cap and doturak daenggi, a bridal hair ribbon, became staples.
Records trace the use of jewelry and accessories in Korea from the Neolithic Age in artifacts such as necklaces, bracelets, hair adornments and earrings made with animal teeth, bones or seashells.
The Three Kingdoms Period saw accessory design flourish and diversify like never before. During this period Goguryu, Shilla and Baekjae designs diversified in terms of aesthetics but the type and level of craftsmanship was similar, with elytron and filigree becoming common. Goguryu had a dynamic, rhythmic style as seen in their hat designs with their long, tail-like decorations and intense arch.
Elegant and subdued characteristics were seen in Baekjae designs while Shilla’s accessories were mostly geometric. Accessories were not only aesthetically pleasing decorative items, but also represented status, the religious atmosphere of the times, even the occult.
The blossoming desire for aesthetic virtue during this period raised the bar for future designs but during the time, it was seem as overly extravagant.
In King Heungduk’s reign, during the late Shilla Dynasty, there was a ban by the royal court which forbade certain classes from wearing certain accessories. The function of accessories as a signifier of rank became more important during and after this period.
There are fewer surviving artifacts from the Goryu Dynasty (918 to 1392 A.D.) but the ones that do remain, including bracelets and earrings, feature a more sophisticated level of handiwork compared to the Unified Shilla Kingdom (668 to 935 A.D.). Buddhist influences, seen in dragons, turtles, orchids and cranes, started to appear during this period.
Until the Joseon Dynasty (1392 to 1910), gold and silver were favored materials for accessories but this ended when the government imposed another ban.
Most precious metals were imported from China and with the relationship between China and Korea deteriorating, the Joseon court banned the use of gold and silver altogether. 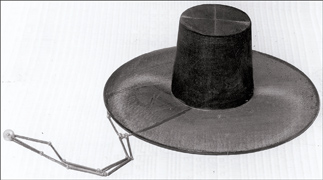 This forced fine jewelry off the rails but led to a creative explosion elsewhere.
“Not only did this gesture deter the mining industry in Korea, but it also closed off Korea from interaction with other countries as well as hindering the development of fine jewelry design,” said Jang Sook-hwan, head of the Damin Traditional Costume Gallery and a professor at Ewha Womans University.
In place of precious metals came fabric and Confucian ideas, which also played a role in the development of Joseon Dynasty accessories.
Modesty, elegance and demureness were the epitome of feminine virtue during this period, with norigae embodying all these elements.
The origins of norigae can be traced back to the Goryeo period, when women wore golden bells and perfume pouches at their waist in the style of the book “Seonwhabongsa Goryeodokyung.” Huge variations of norigae blossomed during the Joseon Dynasty.
“In many ways, norigae is the best example of Korean accessories because they were not only just for the noble class, like the extravagant coiffures with many types of binyeo (a long hairpin to secure a chignon) and dwikkoji (an ornamental hairpin),” Kim said. “Norigae was for the commoners as well. Also, unlike fine jewelry from other countries, norigae showcases beautiful embroidery in earthy colors, done at that time with natural dyes.
In her book “Our Traditional Costume and Accessories,” author Lee Gyeong-ja points out the double-faced element of norigae.
“Not only did norigae accentuate the beauty of hanbok, but it also carried out a practical purpose, by being a perfume or needle case,” she said. “Furthermore, it symbolized women’s desire. Such symbols as a boy’s figure, pepper, eggplant and ax represented their desire for many sons. As a result, norigae became a symbol of woman’s state of mind and attitude rather than a simple ornament of femininity.”
Before marriage, men and women wore daeengi, a ribbon tied at the bottom of braids. Girls wore red and boys wore black. After marriage, it was customary to put the hair up in buns ― women wearing chignons and men, topknots.
“Along with norigae, daenngi characterized the woven, hand made quality of Joseon accessories without the use of metal. And unlike other hair accessories, daenggi was seen more as a matter of etiquette, not an extravagance, which also fit the times well,” Jang said. 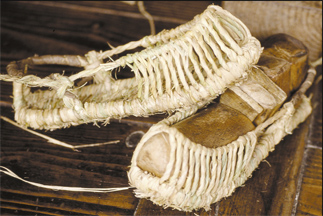 However, other than pins, coiffures and pendants hung on the side of their skirts the accessories of Joseon women were limited.
And since outdoor activities were not allowed for noble women, very few hats were developed, only veils to cover their face.
As so, Joseon was an era of strict formality and boundaries between classes, with the whole country abiding by Confucian standards.
Even shoes were divided by class, the nobles wearing silk and leather while the commoners wore footwear made from straw ― except on rainy days, in which case they wore jinsin, waterproof shoes which were preserved in perilla oil.
“In a way, because Joseon, the culture as a whole, was so confining and class-oriented, it might seem as though all thoughts of aesthetics and style have been diminished,” Kim said. “However, I think that the development of hair accessories or norigae, men’s hats and headpieces and the conflicts with court regulations, brought out a very Korean aspect in the era’s aesthetics, thus differentiating Korean accessories from those found in other countries.”