Western faces at a premium

Western faces at a premium 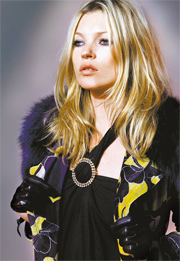 Kate Moss in this season’s campaign for Korean brand GGPX.

It wasn’t long ago that the West called Korea the “Hermit Kingdom” but in the new millennium, the number of non-Koreans living here has reached 1 million.
The evidence can be seen everywhere, with foreign celebrities appearing on television and films and acquiring local stardom. Top international stars including Drew Barrymore and George Clooney are popping up in Korean advertising campaigns.
Particularly in advertising, it seems as if Korean models and celebrities are losing their ground as foreign stars muscle their way into the market.
According to press reports, the Korean menswear brand Galaxy recently secured Pierce Brosnan to appear in their current campaign with a one-year contract that cost them $500,000.
Women’s brand MOGG paid $180,000 to secure top model Daria Werbowy for six months and Hezzy’s Ladies, another women’s brand, paid $90,000 for model Jessica Stam.
“It’s been a little less than five or so years since foreign celebrities and models started appearing in Korean ad campaigns,” said Im Eun-young, a brand manager at GGPX, a Korean clothing brand which currently features Kate Moss, despite the British model’s recent problems with cocaine use. “In the local fashion industry the ratio of foreign to local models is increasing rapidly.”
Im pointed out that Kate Moss doesn’t cost all that much more than Korean singer/actress Lee Hyo-ri.
“There has been a lot of speculation in the media about how our brand spent so much money on using Kate Moss but, in reality, it wasn’t much more than having a top Korean star appear in our ads,” said Im. 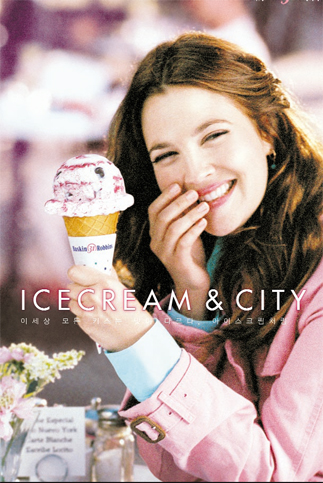 “We paid Jessica Alba $1 million [per year] to appear in our ad,” said Seong Yoo-jin, the head of advertising and promotion at Korean cosmetics brand Isa Knox, adding that this amount is middle-tier compared to top Korean celebrities who demand a much higher premium.
Beside of the rising cost of Korean stars, experts say Korean consumers like to play copycat now that they have unlimited access to the lifestyle of Hollywood stars through cable television, movies and the Internet.
“The tables have turned. Nowadays, consumers know more about global trends than the marketeers,” said Bae Ki-young, a manager at LG Fashion’s advertising department. “Especially for women’s fashion, many Korean women get their inspiration nowadays from paparazzi shots of Hollywood stars and this in turn, becomes the style for local casual brands to emulate and produce.”
“Brands like System and Time [Korean women’s brands] started the trend in the fashion industry back in the late 1990s by using foreign models who were relatively unknown,” Bae said. “Through this strategy, these brands successfully created an image of being a bit mysterious,‘non-Korean’ and in line with global trends.
Im said, “Because our brand [GGPX] concept is based on chic, New York-style fashion, using a Western model is much more productive than hiring a Korean star.”
Another reason for the present trend is that Korean consumers have more knowledge about their own celebrities. When actress Lee Mi-yeon divorced fellow actor Kim Seung-wu in 2000, Lee, formerly know as the “television commercial queen” lost several commercial deals because of her personal life (although the actress is now enjoying a second round of success in commercials with her new image as an independent woman). Other celebrities, because of various scandals involving drunk driving, drugs or sex, have had their advertising contracts cancelled.
“It’s too risky now for big companies to rely on a Korean star because you never know what’s going to happen in their personal life, which, in turn, will tarnish the image of the company,” Bae said.
“A handful of top Korean stars appear as the face of two or more brands,which can be disturbing for the companies, especially if the celebrity’s image for the different brands conflict,” Seong said.
Cover girls for fashion magazines are no exception. Fashion magazines like Vogue, Elle, Bazaar, In Style and GQ, which are operated in Korea under license from their foreign owners, are under strict contracts. They are forbidden to produce their own covers and are only allowed to use foreign covers, usually from the U.S., one month after they have been published.
“For licensed fashion magazines, it is extremely rare to see Asians on the cover,” said Han Yeon-gu, advertising manager at Joong Ang M&B (a sister company of the JoongAng Ilbo that distributes In Style, Cosmopolitan, Sure, Lemon Tree and Ceci).
Han explained that even locally produced magazines, like JoongAng’s Sure, which targets women in their 20s, feature western models because, “That’s the trend now. Everybody, even halfway across the globe, follows Hollywood trends.”
The public’s interest in Western celebrity culture has taken a new path in Korea ― with celebrities being created out of formerly unknown foreign actors and models who are currently residing in Korea. 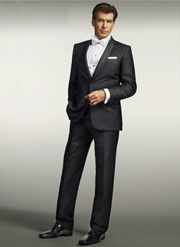 Pierce Brosnan appears in a campaign for Galaxy, a Korean men’s brand. Provided by the companies

One of the most prominent examples is Daniel Henney, a half-Korean, half-British model who shot to fame in Korea because of his successful supporting role in the popular MBC drama “My Name in Kim Sam-soon.”
Others, including Dennis Oh, have been following Henney’s path by becoming celebrities in their own right.
Another show that has been influential in bringing foreign stars to Korean television and billboards is “Chatting Beauties,” a KBS program which features young non-Korean females living in Seoul. Through this show, women like Saori Jang have become famous, appearing in numerous television commercials and a variety show, as well as having small roles in several television dramas.
Having been a guarded, homogeneous society for most of its history, it looks as though Korea is trying to leap from the lake into the ocean. However, this jump is not welcomed by all. “The obsession with Hollywood and Western fashion trends is unseemly to many people,” said Choi Yeong-gyun, a professor at Dongguk University’s advertising department.
“The advertising industry is very trend-oriented and fickle. This current trend of using foreign celebrities and models in Korean advertising is just a reflection of the current state of the society. The advertising industry is not responsible however, for social morality. In a way, it is the most accurate reflection of what people currently desire and look up to,” added Choi.