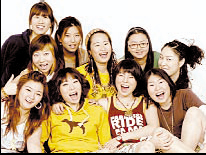 A plagiarism controversy has put the MBC University Music Contest back on the map. This year’s event was held at Dankook University’s Cheonan campus on Saturday. The winners, B2, a reggae group comprised of 10 female students and alumni of the Applied Music department at Hanyang Women’s College, won with their song “Y,” beating twelve other teams. With powerful vocals and voluminous figures, they were dubbed the University’s “Big Mama” (a Korean vocal group with similar characteristics).” The group scored an average of 8.97 from the judges, who included heavy weights from the Korean music industry such as Yang Hee-eun and Bae Chul-soo.
However, online music communities were soon buzzing with allegations that B2’s song, supposedly written by group leader Kim Ji-won, “is very familiar to other reggae songs,” especially “Holding On,” by Korean reggae group Koonta In NuoliuNce. Other postings lean in favor of B2 reading, “The rhythm sounds similar to ‘Holding On’ but that’s about it.”
The annual festival, which started in 1977, has been a major stepping stone for musicians in the past including singer Noh Sa-yeon, rocker Shin Hae-chul and musician Kim Dong-ryul.
With big entertainment companies like SM churning out pre-packaged music stars, the contest lost its influence. MBC was criticized last year when they tried to promote the group EX, the 2006 winner, on their nightly news show.
Cho Jae-eun