A girl needs heartbreak to be a woman

A girl needs heartbreak to be a woman 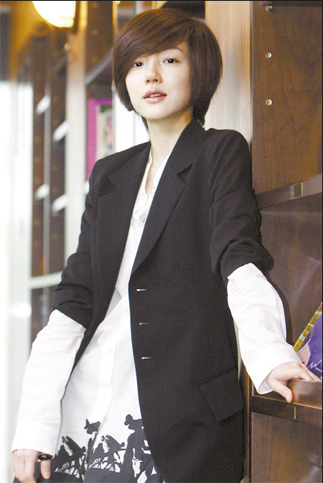 Actress Lim Su-jung, 27, has decided it’s time she started to act her age. By Kang Jung-hyun

Perhaps Lim Su-jung has bid farewell to her girl years. It’s a disappointment, but the 27-year-old actress has made her choice. Now in her late 20s, she is only doing what is natural.
“Happiness” is a film about a young woman who falls in love with a bad boy (Hwang Jung-min) she meets in a rural nursing home. It’s a coming-of-age ritual for Lim. In the movie one of her lines is, “I am older than I look.”
“After starring in a movie about love between adults, rather than between teenagers,” Lim said, “I feel like I’ve grown up, like I’ve married someone.”
With a baby face on a petite frame, Lim has always taken the roles of precocious girls who suffer early tragedies.
In the hit KBS drama “Sorry, I Love You,” she fell in love with an adoptee; in the film “Ing,” she was a terminally ill high school girl who accepted her imminent death with grace.
But Lim has never been an object of sexual desire for older men. Some of her characters even had the power to heal, such as the 30-kilogram (66-pound) anorexic girl in “I’m a Cyborg, But That’s OK.”
Lim was such a perfect fit for the role that the award-winning director Park Chan-wook was amazed.
Happiness, which opened a week ago, is the latest film by Huh Jin-ho, who has previously worked with the hottest actresses of the day, such as Shim Eun-ha (“Christmas in August”) or Lee Young-ae (“One Fine Spring Day”).
Whereas Lee asks her man if he’d like to stay for a bowl of instant noodles, Lim’s character, suffering from a lung disease, wonders if the man would like to live with her. Of course, the love fades away, and the lovers suffer.
“It seems like I’ve just closed the first chapter of my acting career,” Lim said. Beneath her girl-next-door looks lay a strong seam of tenacity and perseverance.
Lim said the filming of Happiness began a week after she finished working on Cyborg. She admitted that she struggled to make the adjustment from the devil-may-care Young-goon character in Cyborg to become the Eun-hee character in Happiness, a much more complicated persona who makes sacrifices for her lover.
Also, she had to adjust to the contrasting styles of the directors: Park Chan-uk in Cyborg was a master at planning ahead, whereas Huh tended to improvise.
“I felt Eun-hee only had a small part in the movie,” Lim said. “But that only motivated me to tackle this role. It wasn’t easy, but once I relaxed, I had the character down.
“I was fairly content after finishing one film, and then the Eun-hee character emerged as another obstacle,” she continued. “That’s why acting is always so challenging. Every role brings out something in me that I didn’t know existed.”
Lim has mostly played young girls in TV dramas and films, and she said it is about time her roles reflected her real age.
“I wanted to be in Happiness because I could project my real sensibilities as a woman in her late 20s,” Lim said. “I couldn’t keep playing a teenage girl forever.”
However, she might have seemed like a girl to her co-star Hwang, who is 10 years her senior. Lim said she’d always wanted to work with Hwang, adding, “His mere presence was an inspiration. In the latter stage of the film, I had tears in my eyes, just looking at him.”
She likely needed all the inspiration she could get during the making of Happiness.
Director Huh left the ending scene wide open, just telling his stars to “sit down and look at each other.”
“He worked with the actors on the spot to add dialogue and other details,” Lim said of her director. “We would do 15, 20 takes for each cut. It was tiring, but as an actor, it was a great opportunity to think through each scene.”
After three films in a year (“Lump of Sugar,” about a girl’s love for horse riding, was the third), Lim said she wants to take a breather, hoping to take on “more outside-the-box” roles in the future.
“With my first chapter closed, I wonder what the next chapter will be like,” Lim said. “As far as acting is concerned, I’d like to be true to myself, and do things my way.
“I want to create a ‘Lim Su-jung’ style. Is that too much of a pipe dream?”