[TV review]The singer felt her age but kept her cool

[TV review]The singer felt her age but kept her cool 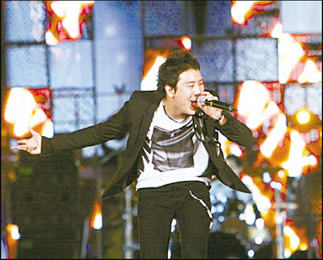 Getting introduced to the friends is an important step in developing a relationship, and I was about to cross that threshold again in a noraebang, or singing room, the other day.
Surrounded by my dear one’s youthful friends ― my man happens to be younger than I ― I was literally sweating in my business suit as I tried to look good in front of his buddies, who were all dressed in sweatshirts and jeans.
It was finally my turn to take the microphone, and I asked for a song by Kang Su-ji, who was in her prime when I was a teenager, singing intensely feminine songs that are perfect for such occasions.
“Oh, I know that song very well,” said one younger person, who was kind enough to find the number for the karaoke machine.
Feeling relieved that I might overcome the age discrepancy, I took the microphone with confidence, only to feel my heart turn cold.
The version the young man had selected was a remake of the song by a 21st century boy band pretending to be a rock group.
The only similarity between the original and the remake was the lyrics, and I quickly announced that I am tone-deaf in order to cover the embarrassment I knew would follow. Everyone did their best to comfort me, but to no avail.
I ended up trying to find some solace in the annual “University Singing Festival,” broadcast last Saturday on MBC-TV.
Since its debut in 1977, it has been the source of dozens of oldies but goodies that are popular with the older crowd in singing rooms.
The program offers spirited university students the chance to present their singing and songwriting skills and it features selected students who are aspiring singers in a competition for scholarships.
The competitors are known for their amateur but refreshing styles that are quite different from the mainstream pop scene.
The festival has been the launch pad for many celebrated singers, and all had original styles and used sophisticated lyrics. However, time changes everything, and I learned that the festival no longer has the compelling power it once did.
After watching for more than two hours, what lingers in my memory are the risque dance moves of the glamorous M.C., Lee Hyo-ri.
The aspiring student musicians ended up singing songs that did not seem to possess the raw energy of youth. Instead, the festival seemed like an audition for celebrity wannabes.
Bands with names like Betwin (not a typo) and Soundream, sang songs with simple lyrics in English like, “Okay, damn bad boys and silly girls, I don’t need you anymore” or sang nonsense like “I will cast biscuit crumbs for you and the Queen.”
Genres ranged from hip-hop to traditional Korean music, yet the warmth that the musicians of the past brought to the show was absent. And many competitors tried to display their so-called comedic talents before and after their songs, which must have left viewers confused about the festival’s identity.
Another major change in the show was the abundance of guest celebrities who performed on stage like they were the main feature of the show.
Many of them were pretty-faced boy or girl bands tossing hackneyed lyrics like “Can’t stop thinking about you girl” or “I will make you mine, babe.” No wonder one of the judges, Yang Hee-eun, a veteran singer, said earlier that there was “no originality” in this year’s event. After the festival, I ended up feeling so old, thinking that the problem of failing to like this year’s MBC show may lie within myself.
Still, one thing is clear. I will continue to sing the good old songs in the noraebang, and I will make sure that I have full command of the karaoke machine’s remote control. I don’t have to sing like the leader of a boy band ever again.