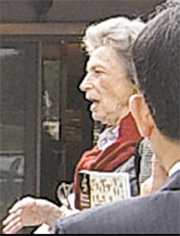 Last Monday in the Trinity sculpture garden, which sits atop the Shinsegae department store’s glitzy new building in central Seoul, executives from the giant retail group had to endure a lecture on art from Doris Fisher, the somewhat haughty billionaire wife of Don Fisher ― the couple founded the Gap clothing company together in 1969.
Gap and Shinsegae are business partners in Korea. As part of their itinerary Doris and Donald were given a tour of the Shinsegae new building and the executives were especially eager to show the couple their fine sculpture collection, which includes a Louis Bourgeois spider, like the one at the Leeum in Itaewon, and a Henry Moore.
The Shinsege executives looked terribly disappointed when Doris Fisher began shouting to her husband, who had gone to look at the new Post Office tower.
“Hey Don,” she yelled. “These Shinsegae guys have a Bourgeois just like ours ― except ours is bigger.”
Turns out the Gap magnates have works by many of the stars featured in the Trinity Garden and Doris Fisher was happy to let the Shinsegae staff know how puny their collection was compared to the pieces on display chez Fisher.
Daniel Jeffreys