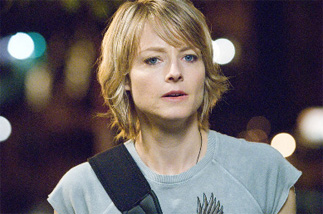 As Erica Bain, a radio host alone with her rage, Jodie Foster puts in a brilliant performance in another mediocre thriller. Courtesy Warner Bros. Pictures

“The Brave One,” Jodie Foster’s latest thriller, is in many ways brave. Foster plays Erica Bain, a radio host who takes to the streets for vengeance after her fiance is murdered.
This is a movie that forgoes twists, reversals and even a very large cast ― there are only two real characters ― yet still aims as high as much heavier productions.
Unfortunately it misses on almost all counts.
Its small footprint, conventional story and hackneyed narration mean it’s doomed to disappear without leaving much of a mark.
But those who do make it out to see The Brave One will be rewarded with one of Jodie Foster’s greatest performances.
And director Neil Jordan has forgotten neither Hitchcock’s cinematic tricks ― nor his sympathetic but brutal earnesty in depicting human suffering.
If only he’d had a better script.
As the film opens, Erica and her fiance are beaten at Stranger’s Gate near Central Park. Erica recovers but her lover does not.
The location of the fateful event is the beginning of the film’s most pervasive ― and ultimately irritating ― theme, that Erica has been replaced by a stranger, “one that has your arms, your legs, your eyes ― a sleepless, restless stranger.”
Not only do the lines sound silly delivered in voice over, sullying an otherwise serious film, they’re obviously false ― even insulting to the audience.
Erica is obviously still the same person after she is assaulted, but she has certainly been irreversibly changed.
This simplistic treatment of the shift denies her character the opportunity for development and relegates her to a static, cliche role.
After the death of her fiance and the police’s failure to find the culprit, Erica falls to fear and paranoia, finding herself unable to walk the streets looking for new musicians for her radio program ― until she buys a gun.
The film shines when there are no words and Foster’s face is left to tell the story.
Together with Jordan she creates an antihero worthy of classic noir, who feels compelled to wander the streets at night and to kill the scum she finds there even if it’s unnecessary.
She does it not because she is evil, but because she is empty.
Foster manages to make her traumatized character look cool and collected and vice versa.
Her sloppy rage trapped in a woman with a good heart plays out on against urban locations that recall classic suspense films and beg to be photographed.
Of course homicide detective Mercer (Terrence Howard) and fan of Erica’s show, after befriending her and going on her show, begins to suspect that she is the killer, which leads to a showdown at an apartment complex with her fiance’s killers.
The inevitable ending is unsatisfying, not to mention completely out of Howard’s character.
Watching Erica run off into the night as though her story has been told is a major disappointment.
Mercer has a partner (Nicky Katt) whose wisecracks universally miss in a poor imitation of “Law & Order,” while a female nurse serves as Erica’s personal one-dimensional mystic (Ene Oloja) there to pick up the pieces and offer advice too trite for Reader’s Digest whenever Erica is in trouble.
As should be apparent these supporting characters are anything but.
And so the question remains unanswered ― why can’t Foster find better scripts to work with?
Her last two starring roles were in “Flightplan” and “Panic Room,” two more thrillers about paranoid women.
At least the mother-daughter aspect has been left behind, and The Brave One does surpass those two films by giving Foster some time to really act.
To break type, however, she needs a role as a complete stranger, but the stranger in The Brave One is just too familiar.
All the same, there’s much to admire about her stoic attitude ― both in her performance and in her acceptance of the stubbornness of Hollywood. In the end, the intense, arresting and faultless turn by Foster makes this vigilante drama worth the admission price.