Where dreams lie fallow in the dark

Where dreams lie fallow in the dark 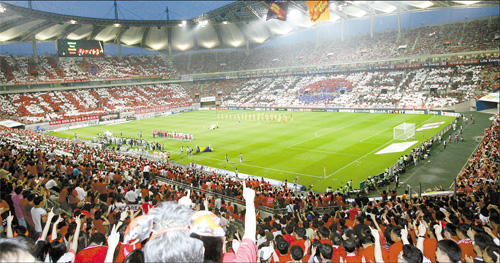 A near-capacity crowd at Seoul World Cup Stadium watched Korea’s international friendly match against Bosnia and Herzegovina in May 2005. By Yang Guang-sam

Football, or what the North Americans call soccer, isn’t the most fan-friendly sport, not least because goals are hard to come by.
Games where nobody scores happen as frequently as rain in Manchester and there are moments when it seems as though players aren’t trying hard enough.
But to this set of eyes, football is the finest spectator sport this side of hockey (what those outside North America call ice hockey).
Watching from the stands, it’s easy to see the teams’ formations, which count for a great deal in football, and appreciate the sheer athleticism of the players.
Anyone who says football players have it easy has probably never seen a game in person.
Also, try listening to the on-field communication among the players, who constantly shout at each other. Actually, you won’t be able to make out what they’re saying, but the mere fact that they are talking so much at all is fascinating in itself.
The bottom line is that any self-respecting sports fan must attend live football games.
After co-hosting the 2002 FIFA World Cup with Japan, Korea now boasts several state-of-the-art football stadiums. To help enhance your football-watching experience, the JoongAng Daily visited four stadiums in and around Seoul. For those without vehicles, don’t despair: each of the stadiums is accessible by subway, though some may be farther from stations than others. 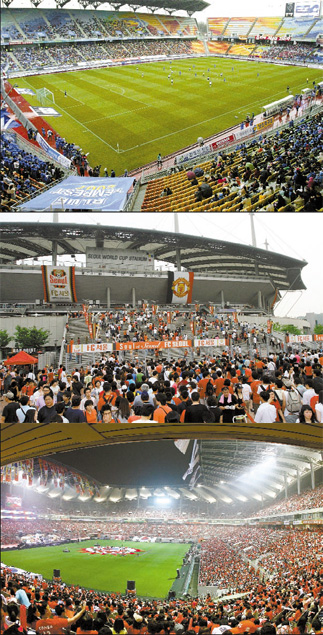 Seoul World Cup Stadium
This is the football stadium of all football stadiums. The pitch is almost always in meticulous shape, seats are close to the action and when you walk in, you will feel like you’re in for something grand.
Seoul World Cup Stadium is the home of the K-League club FC Seoul, and frequently hosts the national team’s friendly matches and various international tournaments. Since June, the stadium has hosted the Peace Cup, the FIFA U-17 World Cup, two national team matches, two Olympic qualification games, Manchester United’s exhibition match, the K-League Cup semifinals and final, the K-League All-Star game and the FA Cup round of 16 game between FC Seoul and the Suwon Bluewings.
In April, 55,397 fans descended upon Mapo to see FC Seoul play host to the Bluewings in a K-League contest.
It was the biggest crowd ever for a Korean professional sports game. Some matches involving the senior national squad have drawn more than 60,000 fans, including June’s friendly between Korea and the Netherlands.
You can enjoy other types of entertainment around the stadium. A multiplex movie theater is adjacent to the north side of the stadium, and a giant discount shop is on the opposite end. There’s also an exhibition hall commemorating Korea’s co-hosting of the 2002 World Cup.
Even during non-game days, Seoulites hang out in the huge square in front of the stadium, kicking around footballs and throwing Frisbees. You can also take a tour of the stadium on non-game days.
On game days, cars should be left at home. There is only one entrance to the parking lot, on the stadium’s north side, and the area gets crowded.
Plus, if you don’t drive there, you can enjoy a cold one or three while not having to worry about leaving your car behind and taking a cab home.
They say football is a beautiful game (Juego Bonito, anyone?). With a beer in your hand, it will seem even more aesthetically pleasing.

Suwon World Cup Stadium
This is the home of K-League club the Suwon Bluewings, and football aficionados across the nation affectionately call this place “The Big Bird.” Indeed, the roof of this giant of a stadium is designed in the shape of bird wings.
The Suwon stadium is also specifically built for football. Seats are painted predominantly in blue, the home team’s color.
Based on personal experience, this is the best venue to watch football. The seats are set on a steeper angle than the Seoul stadium and others around the capital, and this will give you a better view of the entire pitch. If you get a kick out of breaking down strategies, this is the place to go; well, maybe what you really need is to get a life, but that’s another story.
Adjacent to the Suwon stadium are an indoor swimming pool, an indoor golf driving range, a fitness club and a squash court.
There is also an inline skating lane that encircles the stadium for about 1.6 kilometers (1 mile). When you leave the stadium after a night game and you’ve had a cold one or two, make sure you don’t run into the skaters.

Goyang Stadium
This is not one of the senior World Cup stadiums, and it is not home to a major football club: the Goyang Kookmin Bank FC in the second-tier National League is based here.
But Goyang Stadium has also hosted Peace Cup and FIFA U-17 World Cup games this year. If the National League doesn’t interest you, nip out to Goyang when it hosts the odd tournament. But don’t miss this gem of a stadium just outside northwestern Seoul.
Unlike Seoul and Suwon stadiums, there is a track between the seats and the football pitch. But this setting isn’t half bad.
Try sitting directly behind either of the nets. And since there’s some space between the stands and the pitch, you will be farther back from the goal and thus get a better picture of the pitch from a new angle. You know what they say about taking a few steps back to fully appreciate things.
Television coverage of football games mostly shows horizontal action, with only occasional shots from behind the goals.
But plant yourself behind a net, and you will find the football pitch much wider than you’d have thought from watching games on TV, and learn how much players run during a game.
For the record, the length of the pitch for international adult matches is about 90-120 meters and the width can be anywhere between 45 meters and 90 meters. It’s 109 meters long and 75 meters wide at Goyang.

Tanchon Sports Complex
Open up a map of Metropolitan Seoul, and draw a straight diagonal line from Goyang Stadium toward the bottom right hand corner, and you will find this stadium in southeastern Seoul.
At first glance, there’s little that stands out about this modest venue. It’s not even a football-only stadium, the features are nondescript; and it has the smallest capacity of any stadium around Seoul.
But this is the home of K-League’s top club, the Seongnam Chunma. Maybe the stadium itself isn’t too attractive, but it is here that you will get to see the best team in the nation as they dismantle their rivals.
In other words, this place may not be for casual fans hoping for a memorable stadium experience, but is definitely for football aficionados for whom the numbers 4-4-2 are more than just three numerals.
(For the uninitiated, the numbers refer to a widely used football formation of four defenders, four midfielders, and two forwards).
Just to get back in touch with the sports writer in me, the Chunma boast players of national team-caliber in almost every position, including their entire midfield, two of four defensive backs, the starting goalkeeper, and a forward.
Midfielder Kim Do-heon is the K-League’s reigning most valuable player, and could be the next Korean player to reach a major overseas league.

While these four stadiums each have distinctive merits, they do have one common flaw: bad concession stands.
If you hope for a unique culinary experience at football stadiums, brace yourself for disappointment.
There are no variations from stadium to stadium. They all sell bland lines of chips, soft drinks and ice cream cones, all of which go for three times the retail price, and half the things listed on the menu aren’t actually available.
I would recommend you pick up a pack of gimbap (rice and vegetables wrapped in seaweed), a cold bottle of water or soft drink, and some hardboiled eggs from the ajumma merchants outside the stadiums. They will cost you less than a bag of potato chips.
Apparently, though, these ajumma aren’t allowed to sell those snacks. Local police make occasional visits to the scene, mainly when foreign national teams or professional clubs are involved, and force these harmless middle-aged ladies to pack up their wares.
That’s rather unfortunate, because ajumma actually sell the best and most affordable food at football games.