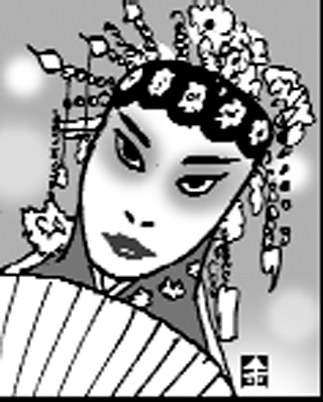 The most interesting term that came out of a recent forum held by the China Research Center of the JoongAng Ilbo was hwa-dan, referring to a role in a traditional Chinese opera. In such operas, the female roles are called dan. The main female character is called jeong-dan, meaning the right dan, or sometimes, depending on what she’s wearing, cheong-yi, which literally means blue costume. The hwa-dan role is less important than the title role. Maids who serve wealthy families or high-profile government officials often appear on the stage in this role.
The hwa-dan usually struts showing off her sexy charm. Gliding gracefully with a slender waist and an ample bottom or faking a high-pitched voice, she catches the audience’s attention and becomes an seductive mistress on the stage.
Chinese experts who attended the forum described contemporary Chinese politics as “the hwa-dan walking tiptoe on the stage.”
Why did they call it that? The expression came out of a certain discontent that the political reform there is not radical enough, even though economic growth has made its point. Certainly it is safe to expect that, under the one-party rule of the Communisty Party of China, far-reaching political changes are not on the horizon.
However, Chinese intellectuals frequently speak up, calling for a better political situation. They have high hopes for the leadership of Hu Jintao, which is pursuing distributive justice and harmonious growth in society while emphasizing growth in less-developed areas.
China seems ready to move on, however small those steps are. It is true that intellectuals find them unsatisfactory, but you can still sense an atmosphere in which people are searching for a breakthrough to change the current situation. Although China has not yet abolished the one-party dictatorship of the Communist Party, the people maintain that the locomotive of change is moving toward progress, under the idea that “unless you change, you will collapse.”
I fear that Korean politics is the problem. If you expect something has changed for the better, your expectations will be met with the same cold reality; everything is the same. The process in which parties selected presidential candidates has been nothing but a melting pot of different fiascoes. The journey to achieve democratization has been remarkable, but the reality now is mediocre.
The tiptoeing by the Chinese Communist Party looks better than ours, although we used to ignore China due to its “rudimentary” political system.